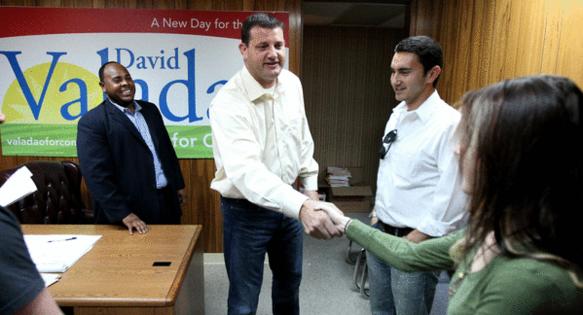 A day after Wyoming Republican primary voters booted Liz Cheney from her congressional seat, only two of the 10 GOP members of Congress who voted to impeach former President Donald Trump for inciting the Jan. 6 insurrection remain clinging to their seats.

One is from eastern Washington. The other is from California’s Central Valley — David Valadao, a dairy farmer from Hanford, who, despite his Republican bonafides has — like Cheney — unleashed the venom of his fellow farmers and ranchers, and relatives, too, for what they consider an unforgivable act of betrayal.

Valadao barely beat back two other Republican primary opponents in June. But in a purple district recently redrawn with even more Democratic voters, Valadao’s chances to beat moderate Democratic Assembly Member Rudy Salas in November are at risk.

And the GOP die-hards who vowed to never cast another ballot for Valadao are finding themselves in a difficult predicament: With control of the House of Representatives at stake, will they break their vow and vote for Valadao?

“It’s a tough thing that everybody’s cussing about,” said Todd Cotta, a Hanford gun store owner who joined about nine of his buddies at the Overland Stockyards cafe for breakfast Wednesday as he does every morning at 6 a.m. “You have dog crap on one plate and cat crap on the other plate. Which one you gonna eat?”

Of 10 Republican House members who voted to impeach Trump, four opted out of running for re-election and four, including Cheney, lost in primaries to Trump-backed challengers. That leaves Dan Newhouse, of Washington, and Valadao — the only two who survived their primaries and are headed to November elections against Democrats.

“The open question now is will Trump Republicans not pleased with Valadao for his vote on impeachment sit on their hands come November?” said Bill Whalen, a GOP strategist and Hoover Institution fellow. “They will not vote for the Democratic alternative, but will they just not take part in the election and just sit it out?”

Trump at first set his sights on all 10 Republicans who voted to impeach him in January 2021, gloating after the first two announced they weren’t seeking reelection last year “2 down, 8 to go!”

And while Trump took a vocal role in supporting Cheney’s Republican opponent, Harriet Hageman, who will likely win in November, he has been noticeably silent about Valadao. He declined to endorse Valadao’s primary opponent and MAGA candidate Chris Mathys.