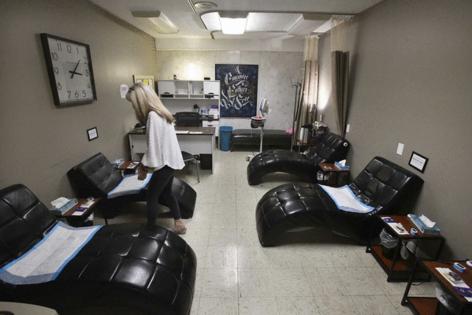 Cunningham made the announcement at the start of what is expected to be a two-day hearing over the potential for a preliminary injunction. Such as order would block county prosecutors from enforcing the state's abortion law as the courts consider a lawsuit brought by Democratic Gov. Gretchen Whitmer seeking to overturn the abortion ban as unconstitutional.

The evidentiary hearing began Wednesday in Oakland Circuit Court with attorneys renewing their arguments for and against the temporary ban and medical experts weighing in from the witness stand. It appears to be the first court hearing in the nation held about the impact of a state abortion law since the U.S. Supreme Court ruled to overturn Roe v. Wade and return abortion policy decisions to the states.

It occurred as anti-abortion and abortion rights protesters rallied outside the court.

Linus Banghart-Linn, an assistant state attorney general, told Cunningham that the judge would hear testimony supporting state arguments that enforcement of the law criminalizing abortion would violate the constitutional rights of Michigan residents, including their right to due process, equal protection under the law and “bodily integrity” in seeking an abortion.

“It (law) was designed to control the destiny of women and choices at their discretion,” Banghart-Linn said. “Crudely put, it (law) was used to keep women in their place.”

“’Put women down?’ Are you kidding me,” Kallman said. “No one is alive today that knows why that law was written. ... We have lots of old laws on the books. You have a right to try and change law, but you can’t pick the ones you want to enforce. And asking you to do that, judge, is prejudging this case ...

“Doing that would give Michigan the most permissive abortion law in the nation and put us on a par with China and North Korea.”

The first two witnesses called by the state both expressed concerns about the impact of prosecuting people seeking abortions or those providing them would have on the public health system in Michigan. The state's 1931 law has already made it “very hard” to provide help to women seeking abortions, said Dr. Lisa Harris, an obstetrician-gynecologist and associate director of Obstetrics and Gynecology at University of Michigan Michigan Medicine.