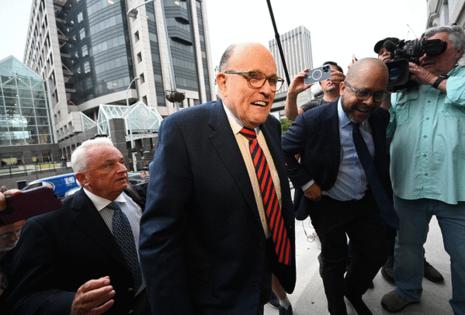 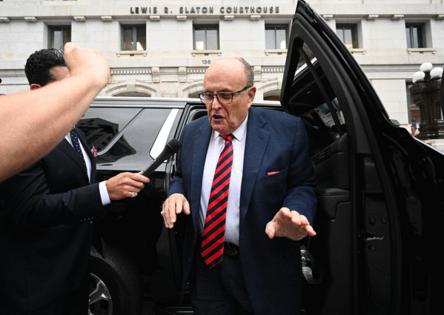 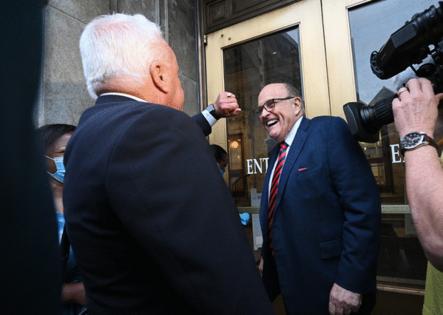 Pryor Street in downtown Atlanta took on a circus-like atmosphere as some three-dozen reporters and camera operators from local and national news outlets jockeyed for the best view of the former New York City mayor. He arrived around 8:30 a.m., accompanied by his lawyer, Robert J. Costello, and former GOP gubernatorial candidate Vernon Jones.

“Grand juries, as I recall, are secret,” Giuliani said when asked about his testimony. “They ask the questions and we’ll see. "

The commotion came after Costello confirmed that his client was notified on Monday that he’s a target of the investigation and could be indicted.

“It’s just a further desecration of the Sixth Amendment. I was his lawyer of record in that case,” Giuliani said Monday on Newsmax, referencing Trump. “The statements that I made are either attorney-client privilege, because they were between me and him, or they were being made on his behalf in order to defend him.”

Giuliani’s appearance is undoubtedly one of the most high profile for the 23-person grand jury, which was selected in May and has already interviewed dozens of witnesses. It’s tasked with investigating whether Trump or his allies like Giuliani broke any state laws as they tried to overturn Georgia’s 2020 presidential election results.

Fulton County District Attorney Fani Willis, who is advising the grand jury and will ultimately decide whether to press charges, has faced increasing resistance from witnesses as she’s gotten closer to Trump’s inner circle.

It’s unclear whether Giuliani plans to plead the Fifth Amendment to avoid self-incrimination, though he’s likely to cite attorney-client privilege to avoid answering questions about specific conversations he had with Trump.