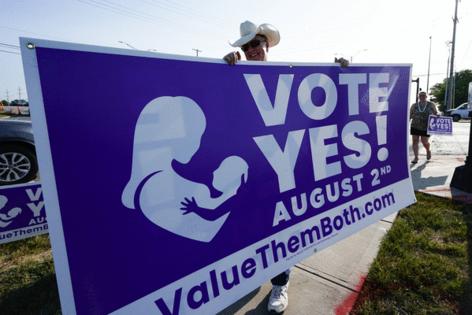 The eight counties where recounts will take place is far short of the sweeping statewide recount envisioned by diehard supporters of the Value Them Both amendment, which would have stripped abortion rights from the Kansas Constitution.

Proponents of a recount ultimately raised roughly $120,000, allowing them to pay for recounts in just a fraction of Kansas’ 105 counties. Still, the recount will include several of the state’s biggest counties —Johnson, Sedgwick, Douglas and Shawnee.

Most of the cost will be charged to a credit card provided by Mark Gietzen, a long-time anti-abortion activist in Wichita who leads the hard-right Kansas Republican Assembly, the Kansas Secretary of State’s Office said.

The amendment went down in a landslide defeat in the Aug. 2 election. The 59% to 41% victory for amendment opponents reverberated nationally in the wake of the U.S. Supreme Court’s June decision striking down Roe v. Wade. The abortion rights side won the statewide referendum by more than 165,000 votes.

The recounts will keep the rejected abortion amendment in the public eye as Republicans try to turn their attention to the general election. Kansas Attorney General Derek Schmidt, the Republican nominee for governor, faces incumbent Democratic Gov. Laura Kelly in what is expected to be an extremely competitive race.

“This all fits into a pattern, if you will, of raising money from the faithful to joust at windmills,” said state Rep. John Carmichael, a Wichita Democrat who supports abortion rights but has been familiar with Gietzen since at least the early 1990s.

Carmichael said Gietzen has spent years raising money on the fringes of Kansas’ anti-abortion movements. His efforts, Carmichael said, “made little if any sense and never resulted in any substantive progress for the pro-life movement.”

The decision to scale down the recount came after days of scrambling among recount supporters and uncertainty over how much money they would put forward. Melissa Leavitt, a Colby resident who has testified to the Legislature about unfounded claims of voter fraud, set the tumultuous process in motion when she requested the recount on Friday afternoon.

Under Kansas law, requesters of primary ballot recounts must put up a bond for the cost of the recount. If the results of the election do not change the bond will be cashed and distributed.