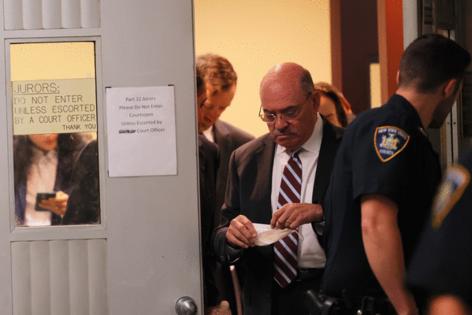 Weisselberg’s 11th hour decision comes days after a judge ruled the case against him could proceed to trial in October. A source who works in the courthouse said the Trump Org chief financial officer had been scheduled to appear before Manhattan Supreme Court Justice Juan Merchan on Thursday.

Terms of the CFO’s plea agreement with the DA were not disclosed. The charges obtained by grand jury indictment in June 2021 came after Weisselberg, 75, who once referred to himself as Donald Trump’s “eyes and ears,” refused to flip in prosecutors’ long-running investigation into the former president’s business practices.

The plea expected Thursday will not be a result of Weisselberg cooperating against Trump, according to the New York Times, which first reported the deal.

When he was arrested, Weisselberg pleaded not guilty to dodging taxes on $1.7 million in fringe benefits over 15 years while heading the Trump family business’s finances. Donald’s father Fred hired Weisselberg as a bookkeeper in the 1970s, and he’s worked for the company since.

The Manhattan DA declined to comment. Weisselberg’s attorney Mary Mulligan said she was not in a position to comment. His lawyer Nicholas Gravante could not be reached.