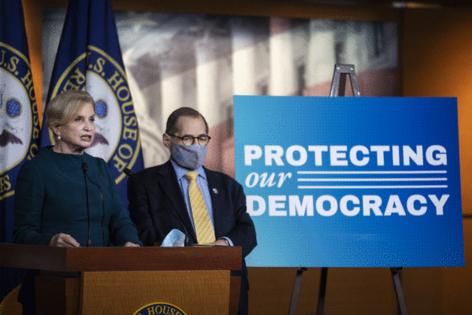 The newspaper on Saturday backed Jerry Nadler, a longtime U.S. representative with strong liberal credentials; Sean Patrick Maloney, an incumbent running for a newly drawn district, and Dan Goldman, a former federal prosecutor and heir to the Levi Strauss & Co. fortune. The races are important because they could help determine whether Democrats or Republicans win control of the House in November, the Times said.

The endorsements will provide a boost to the three candidates in a raft of crowded races held in the dead of August and expected to be marked by low turnout. Still, the Times’ endorsement isn’t a guarantee at the ballot box. Last year, the newspaper endorsed former City Sanitation Commissioner Kathryn Garcia for mayor, and she lost to rival Eric Adams in a tight race.

“New York’s chaotic primary elections for Congress, which will be held on Aug. 23, are the outcome of Democrats in Albany having tried to do an end run around the state Constitution’s ban on partisan gerrymandering,” the Times said in its endorsement. “The courts smacked them down for that, and a hurried and confusing race to represent 20 million New Yorkers is now the result. ”

After the ruling, a new congressional map approved by a judge pitted Nadler against incumbent Rep. Carolyn Maloney when their respective districts on the Upper West Side and Upper East Side of Manhattan were merged into a newly configured 12th District. Nadler’s endorsement by the paper’s editorial board deals a large blow to Maloney, who has served Manhattan for 30 years.

Nadler voted against the Iraq war, supported the 2015 nuclear deal with Iran and has “used his ample influence and seniority to advance urgent legislative work on gun safety, voting rights, the Trump impeachments and more,” the Times said.

Maloney supported the Iraq war, the Times said, and “has a troubling history of promoting false information linking vaccines to autism.” In an interview with the Times’ editorial board earlier this month, Maloney also said President Joe Biden shouldn’t run for a second term.

Backing Goldman for the 10th district, the Times said the former federal prosecutor’s experience and knowledge of congressional oversight and the rule of law “could prove especially valuable in Congress in coming years.” The endorsement will help voters in Lower Manhattan and brownstone Brooklyn cut through the noise of a dozen candidates with few ideological differences.

Sean Patrick Maloney is a longtime resident of the newly drawn 17th district, located in the northern suburbs of New York City, and knows its constituents well, the Times said in its endorsement of the candidate. “His positions on the big issues — climate change, housing affordability, public safety, abortion rights, LGBTQ rights — are consistent with what this district needs,” the newspaper added.

The endorsement could lessen the chance Alessandra Biaggi, backed by Rep. Alexandra Ocasio-Cortez, will be able to deliver the progressive upset she has pledged to pull off.