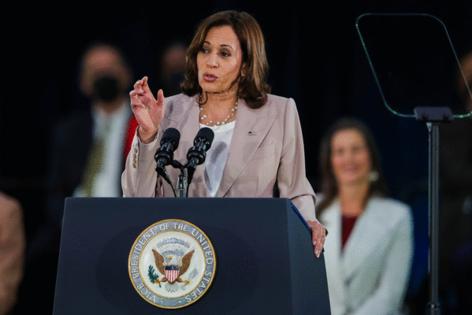 Vice President Kamala Harris condemned an attempted attack on an FBI office and criticized supporters of Donald Trump for incendiary rhetoric that has fueled a backlash against law enforcement following a raid on the former president’s Florida home.

“I will say, as a former prosecutor, but as a citizen of our nation, any attacks on law enforcement are completely unacceptable,” Harris told reporters aboard Air Force Two on Friday. “And any so-called leader who engages in rhetoric that in any way suggests that law enforcement should be exposed to that kind of danger is irresponsible and can result in dangerous activities.”

Federal agents searched Trump’s Mar-a-Lago home this week and seized documents bearing the U.S. government’s highest top secret rating as part of an investigation into whether he was unlawfully holding on to classified documents, a development that creates risks for his possible run for the presidency in 2024.

Harris is the highest-ranking White House official to comment on the political fallout.

In a fierce backlash following the raid on Monday, Trump supporters and some Republican lawmakers decried the search as politicized. They included voices such as Sen. Marco Rubio, R-Fla., who tweeted that President Joe Biden was “playing with fire” by allegedly using the Justice Department “to persecute a likely future election opponent.” Biden learned of the raid from media reports, according to the White House.

On Thursday, a man was fatally shot after trying to breach an FBI building in Cincinnati.

“It’s just highly irresponsible of anyone who calls themselves a leader and certainly anyone who represents the United States of America to engage in rhetoric for the sake of some political objective that can result in harm to law enforcement officers and agents,” Harris said.