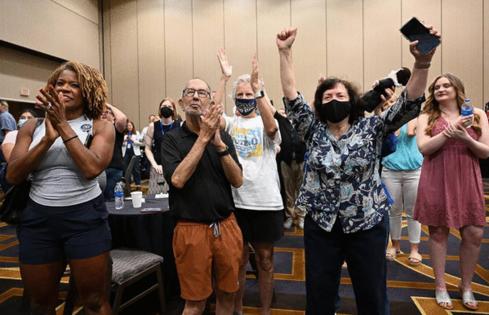 Kansas election officials plan to conduct a statewide recount of the vote rejecting an amendment to remove abortion rights from the state constitution after a citizen posted a $200,000 bond for the recount, the state Secretary of State’s Office said.

Melissa Leavitt, who has been fundraising for a recount based on vague suspicions of fraud, asked for the abortion amendment recount ahead of a 5 p.m. Central time Friday deadline. A crowd-funding account set up by Leavitt showed less than $3,000 raised as of Friday afternoon, but Whitney Tempel, a spokeswoman for the Kansas Secretary of State’s Office, said Leavitt posted a $200,000 bond.

Kansas elections director Bryan Caskey plans to go along with the request, The Associated Press reported. Caskey said it would be the first recount of votes on a statewide ballot question in at least 30 years.

“Normally, they reinforce the Election Day results,” Caskey said about recounts. “We stand by the results and will do the recount.”

The amendment recount vote is extremely unlikely to alter the overall results. The amendment was defeated in a 59% to 41% landslide, according to unofficial results. “No” earned more than 165,000 more votes than “yes.”

Still, the recount effort underscores how unfounded fears of election fraud have taken hold with some in Kansas. In Johnson County, the state’s most populous, Sheriff Calvin Hayden has been conducting an election-related investigation for months, stoking suspicions of malfeasance without making detailed allegations.

“I have never done an audit like this but I believe that God has put us all here ‘for such a time as this’ to stand up and fight for our nation,” Leavitt wrote on her crowd-funding page. “We must do what we can before it’s too late.”

Many counties have already certified their election results, but others — including the state’s largest counties — are set to certify in the coming days. Johnson County is set to certify on Monday.