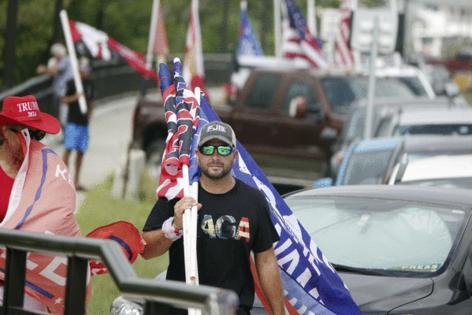 “The raid against MAL (Mar-a-Lago) is another escalation in the weaponization of federal agencies against the Regime’s political opponents, while people like Hunter Biden get treated with kid gloves. Now the Regime is getting another 87k IRS agents to wield against its adversaries? Banana Republic.” — Gov. Ron DeSantis in a recent tweet about the FBI search of Mar-a-Lago.

Ah, good governor, you’re so right. How dare the FBI follow the clues that lead to your mentor’s door. Law and order is so inconvenient, when you’re not the one doing the lawing and ordering. Don’t those gun-touting goons know that rules must only be applied when convenient to a particular political party, the one that starts with a capital R? No worries. When you’re president you can reinforce that lesson with daily re-education sessions in the Oval Office. Say it together: Own the libs!

You were righteously perturbed about the FBI serving a search warrant and then snooping around Donald Trump’s home. The former president wasn’t even there to open his safe or serve them cheeseburgers. We know you have no love for Florida media, but we thought we could help you work through your anger and maybe strengthen some of your arguments. It’s the least we could do since you’re so busy governing and making us the freest state in the history of freedom.

First off, sir, “the Regime” is a weak construction. At least try capitalizing the article. “The Regime.” See? More sinister already.

Second, leaving it at “the raid”? Really? You can do better. Try “the raid by armed federal storm troopers and safe crackers swarming Mar-a-Lago.” That’s more descriptive, and the use of “federal” helps readers understand that you would never think of disparaging law enforcement, unless it’s the federal variety. You know, the folks who keep us safe from terrorists. The wording should make readers feel as if they too are being trampled under the jackboots of Deep State thugs who, cloaked in anonymity because they’re fraidy cats, recovered Deep State secrets. After all, what is so-called “classified information” except information that Deep Staters don’t want us free people to know? The truth is out there.

Name-checking Hunter Biden and then just letting him drop is a missed opportunity. Has anybody seen him since China starting launching missiles all over the place trying to intimidate Taiwan? How do we know Hunter wasn’t at mission control wearing a headset, giving aid and succor to the Chinese who have done so much for him? What secret Taiwanese coordinates might he have stored on that laptop? And why do we think Daddy — a.k.a. the President — warned House Speaker Nancy Pelosi against going to Taiwan? Maybe it would hurt business for his boy? Hmm? Just asking. So should you. Be imperious about it. You’re good at that, like when you properly scolded those school children for wearing COVID masks at one of your news conferences.

Name more names, and hint at the obvious conspiracy. It’s not hard. Attorney General Merrick Garland supposedly follows the facts where they lead. Here are some facts: It’s been six years since Garland was nominated for the Supreme Court and then-Senate Majority Leader Mitch McConnell ran out the clock. That’s one “6.” Garland had been nominated on the 16th day of March. Six-teenth. Drop off the teenth and what do you have — another 6. Stay with us here. The raid occurred on Aug. 8. The eighth day of the eighth month. Add them, you get ... 16! Drop off the teenth and you’ve got another 6. That’s three sixes! A coincidence? No, the mark of the beast, the antichrist, you know, the Democrats. Don’t say we didn’t warn you.

Show your concern about the weaponization of the FBI by demonstrating just how widespread and unfair it is. Just a few days ago, the FBI raided the Uhuru House in St. Petersburg, apparently looking for ... wait for it ... Russian collusion. You haven’t said a word publicly about that raid, but you’re surely just as outraged. Of course you are. Uhuru House is just like Mar-a-Lago, but without the tennis courts, croquet lawns, ornate dining room and millionaire conservatives everywhere you look — but better pies. We’re sure the tweet about Uhuru injustice is coming any minute now. Go ahead and vent. Show some solidarity with your Uhuru comrades in their stand against the FBI. Sorry, we didn’t mean “comrades” in the Commie sense. More in the sense of “comrades in arms like everybody in Florida is armed.”

And sometimes, sir, less is more. Maybe don’t talk about another “87k IRS agents to wield against its adversaries.” We admit “agents” is a great Deep State word and — hard to believe — it’s what they actually call themselves. But, you know, there’s the small problem that they will more than earn their salaries by making sure those lawless Democrats pay the taxes they owe. Remember now, our indebted nation needs all the help it can get to fight Bidenflation.

Lastly, that clever reference to “Banana Republic” is right on the nose. Imagine a Republican governor who ousts somebody — say a twice-elected Democratic state attorney from Hillsborough County — for what he said, not what he did. Oops. That’s a little close to home. Moving on.

There is no doubt that what the Deep State is doing is bananas. But don’t worry. In the end, Americans are good at sussing out who is really putting the authority in “authoritarian.”

Editorials are the institutional voice of the Tampa Bay Times. The members of the Editorial Board are Editor of Editorials Graham Brink, Sherri Day, Sebastian Dortch, John Hill, Jim Verhulst and Chairman and CEO Conan Gallaty. Follow @TBTimes_Opinion on Twitter for more opinion news.