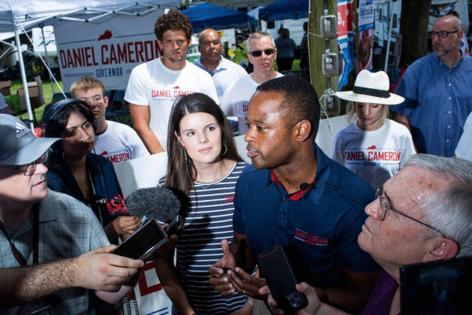 But how closely does Cameron back Trump, given the continual cycle of news surrounding the former president’s attempt to overturn the results of the 2020 election and his reported refusal to turn over classified White House documents which led to an FBI search of his residence?

Although he’s currently the top law enforcement official in Kentucky, Cameron doubled down in his support for Trump amid news of the FBI search, praising Trump as a “fighter” in a post on Twitter.

“No raid at Mar-a-Lago is going to stop him from working hard for the American people,” Cameron wrote. “Folks here in Kentucky will always support someone the media despises and the left hates, because it means that person is standing up for their values.”

Does Cameron, along with the rest of the GOP candidates running for the state’s highest post, also agree with Trump’s most prominent rallying cry post-election: the false claims that he actually beat Joe Biden and that there was widespread election fraud?

Cameron and other 2023 hopefuls won’t really say one way or the other. But they also won’t acknowledge the legitimacy of Biden’s win.

When asked about Trump and 2020 during the Fancy Farm political picnic last weekend, Cameron stated that the election was fair in Kentucky but didn’t elaborate nationwide beyond admitting that Joe Biden is the current president.

“(The media) breathlessly report on the 2020 election. We are almost in 2023,” Cameron said. “… President Biden is the president of the United States. I don’t dispute that. What I dispute is you all continuing to breathlessly talk about it.”

In response to continued questioning from Al Cross, Director of the Institute for Rural Journalism at the University of Kentucky, Cameron said that “I hope at some point you get to interview Donald Trump and you can ask him all these questions.”

Trump has often aligned himself with candidates who flat-out deny the results of the 2020 election; in races since his presidential loss, his endorsement has proven helpful but not bulletproof.