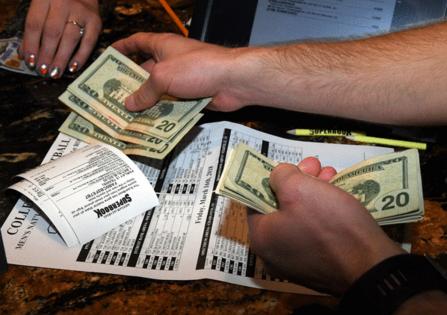 The onslaught of political advertising that will fly at us this election season is shaping up to be more intense than ever, with most of it trained on two dueling measures to permit sports betting. Gambling interests have already anted up roughly $350 million to wage campaigns for and against Propositions 26 and 27 on the November ballot. It’s a stunning sum of money, even for a state that’s used to big-dollar campaigns, and experts expect the total haul may grow to half a billion dollars by the time the election is over.

That dwarfs the $224 million spent on the 2020 ballot measure that Uber and Lyft pushed to change state labor law — which, at the time, broke the record as the most expensive campaign in California history. Ride-hailing apps were willing to spend so much because the proposition amounted to an investment, allowing them to save money in the long term by not treating their drivers as employees.

You’ve probably already seen some of the ads, trying to convince you that online sports betting will generate a tax windfall that could solve homelessness, or that it’s nothing but a greedy move by big corporations. Another ad pits poor tribes against rich tribes in an especially depressing attempt at voter manipulation. Get ready for a lot more, because the campaigns for and against Propositions 26 and 27 have bought up loads of airtime.

The huge sums and high stakes illustrate, yet again, how much California’s system of direct democracy — originally envisioned as a populist tool to circumvent corporate influence on the Legislature — has morphed into a venue for industry fights and a forum for special interests to write their own laws and regulations through the ballot box.

Also on this November’s ballot: A measure cigarette makers have spent $20 million pushing to repeal California’s ban on flavored tobacco products (Proposition 31), and a healthcare union’s fight that dialysis clinics have already given $40 million to defeat (Proposition 29). Even an environmentalist measure to tax the rich to reduce greenhouse gas emissions by subsidizing the electric-vehicle market has a special-interest angle: Proposition 30 is funded almost entirely by Lyft, which would benefit from it because ride-hailing companies are required to transition to clean vehicles by 2030.

But none of them are going to get as much attention as the sports betting measures, which could create a roughly $3-billion market for sports wagering if California becomes the 34th state to legalize the practice. That potential prize has pulled Indian tribes, cardrooms and online sports betting platforms into a turf war rife with complex allegiances and long-standing beefs. There are feuds between tribes and cardrooms, between cardrooms and horse racing tracks and between tribes and online sports betting companies. Everyone who has a stake in the gambling business seems to be fighting for a bigger slice of the pie.

A tribal leader bristled when I said that during an editorial board meeting with the Yes on Proposition 26 campaign. (We are meeting with all the statewide ballot measure campaigns and will publish our recommendations next month.)

“Tribes have been called a lot of things over the years. I’m not quite sure we’ve ever been called a faction of the gambling industry,” said Butch Murphy, a councilman with the Pechanga Band of Indians, which has contributed $15 million to a campaign to allow sports betting at tribal casinos and oppose online sports betting.

“We are a tribal nation that happens to be in the gaming business because the opportunity presented itself. Fortunately, we’ve worked hard enough to make that business successful and we’ve been able to provide for our 2,000 members a better life.”

Though tribal leaders may not see themselves as part of the gaming industry, there is no doubt that the legalization of sports betting would create a pot of gold for whatever parties are allowed to participate in the new industry — which is why so much money is being poured into the campaigns for Propositions 26 and 27. That leaves voters to parse technical, complex measures that will decide who wins and who loses. You can bet on that.

Laurel Rosenhall is an editorial writer focused on California politics, policy and power. She is based in the Los Angeles Times Sacramento Bureau.