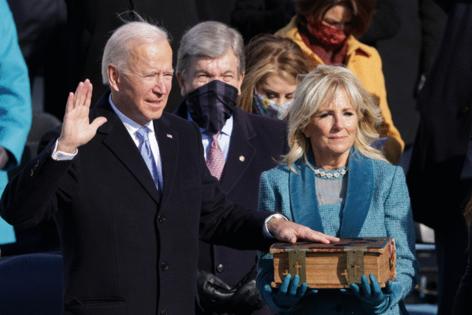 As former President Donald Trump desperately clung to power last year, and his agitated supporters violently invaded the Capitol, a number of flaws in the U.S. election system became all too clear. Thankfully, one of them may soon be fixed.

After months of negotiations, a bipartisan group of senators has released a set of reforms to the Electoral Count Act of 1887. In conjunction with the 12th Amendment, the act establishes a framework for casting and counting electoral votes in a presidential election and provides a process for adjudicating disputes.

Notoriously, the law’s wording is inartful in crucial respects. It allows for just one legislator in both chambers to object to a state’s electors if their votes were not “lawfully certified” or “regularly given,” for instance, but it doesn’t clearly define those terms. Similarly, while the text spells out the vice president’s duties in this process, and implies that this role is purely ceremonial, it fails to explicitly rule out any more substantive decision-making powers.

Trump’s multi-tiered plot to stay in power hinged on exploiting precisely such ambiguities. After Joe Biden’s victory in November, one of Trump’s lawyers drafted a six-page memo outlining how Vice President Mike Pence might be prevailed upon to reject legitimate votes during the certification process. Trump’s campaign assembled fake slates of electors from seven states Biden had won, with the hope that Pence would recognize them instead of the real electors — or, alternatively, declare the votes from those states in “dispute” and toss them out — thereby throwing the election to Trump. Pence insisted, correctly, that he had no authority to do any such thing.

It bears repeating that those advancing this plot were not exactly rocket scientists and that no relevant legal authority would ever have gone along with it. Yet it was damaging all the same. It lent a veneer of plausibility to Trump’s claims, emboldened his loyalists to storm the Capitol, and undermined faith in the broader electoral process. When Trump denounced Pence for refusing to go along with the scheme, the assembled mob called for his head.

If passed, the bill proposed by the Senate group would go a long way toward preventing a repeat of this fiasco. (Majority Leader Chuck Schumer has said the Senate will vote on the legislation after the August recess; the House still needs to take up its own version.) It clarifies that the vice president’s role in counting votes is “solely ministerial.” It also would require one-fifth of the members in each chamber to object to an electoral slate — making it more difficult for partisans to grandstand and obstruct the process.

Prudently, the legislation also stipulates that governors (or other officials as determined by state law) have sole authority for certifying and submitting election slates to Congress. This should head off any harebrained attempts by state legislators to submit dueling electors. If legitimate controversies arise over how a state conducted its election, an “aggrieved” presidential candidate can petition a three-judge federal panel to hear his or her complaint, and, if necessary, escalate the dispute to the Supreme Court.

For too long, the tragicomic shenanigans of the late-stage Trump administration have threatened to obscure significant defects in America’s electoral machinery. Fixing the Electoral Count Act is step one toward repairing them.