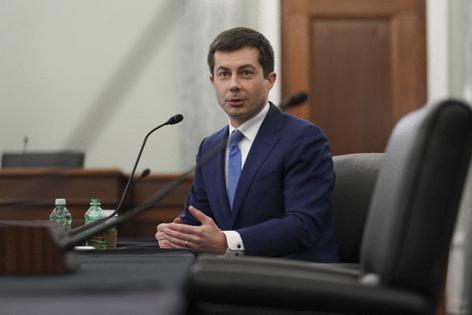 “One thing I think you’ll see come across as we speak to communities that are receiving grant awards is how passionate they are about the need for their project,” Transportation Secretary Pete Buttigieg said on a call with reporters previewing the announcements. “We hear from residents who live with transportation infrastructure challenges every day and communities that have great ideas about how to address them.”

The 166 awards, totaling more than $2.2 billion, are the first from funding in the 2021 law for what are called RAISE grants, for Rebuilding American Infrastructure with Sustainability and Equity. RAISE grants — which may include a 20% matching fund requirement — can go to a wide variety of entities, including states, territories and Washington, D.C., as well as tribes, cities and regional transportation entities.

Projects in some key midterm battleground states are among those the administration chose to highlight.

Buttigieg is scheduled to appear with Sen. Mark Kelly, D-Ariz., and Democratic members of the Arizona congressional delegation later Thursday in Phoenix and Tucson to highlight two of those projects. A $25 million grant in Tucson includes roadway upgrades and a new bridge over Union Pacific Railroad tracks that the administration says could help with supply chains. Several other projects in Arizona, including in rural tribal areas, will be funded.

Fellow Arizona Sen. Kyrsten Sinema was not listed by the DOT as attending either event, though she was a leader among Democrats in the effort to get last year’s sweeping infrastructure measure to the point of becoming law. She’s also not on the ballot this year, as Kelly is in a race that’s rated a Toss-up by Inside Elections with Nathan L. Gonzales.

Featured projects in New Hampshire, where Sen. Maggie Hassan‘s race is rated Tilt Democratic, include about $19.5 million for the city of Berlin to mitigate the effects of snowfall.

“Their plan for renewing their economy centers on the downtown, but they have businesses that have not always been accessible to customers, in a place where winters average over 7 feet of snow,” Buttigieg said of the northern New Hampshire city. “We’re helping them to pump excess heat from a nearby biomass power plant under their streets and sidewalks to help keep them free of snow so that people can more safely navigate downtown, helping to boost the local economy.”

There’s also funding provided for projects in northern and southern Nevada and Georgia, where Sens. Catherine Cortez Masto and Raphael Warnock, respectively, are both in Toss-up races. Buttigieg said there would be funding to support MARTA, the transportation authority in Atlanta.

“They are working on a transformation of their Five Points station which got a $25 million grant award to help them revitalize the station plaza and public space while making it safer and improving the bus-rail connectivity there,” the secretary said.

Mitch Landrieu, a senior adviser to the president and coordinator of implementation of the infrastructure law, said he planned to be in Georgia on Thursday.

“These projects are going to strengthen supply chain so that we can get goods to communities more quickly and more efficiently,” Landrieu said on the call with Buttigieg. “They’re going to address safety including bicycle and pedestrian access, as well as reduce emissions to tackle climate change.”

In the national capital region, $20 million is being provided to the Virginia Passenger Rail Authority for a proposed bicycle and pedestrian bridge across the Potomac River, between Long Bridge Park and East and West Potomac Parks.

“The project will reduce crashes by adding protected and separated facilities for bicycles and pedestrians,” documentation provided by the White House said. “The project will create an accessible and more affordable way for the community to connect to the surrounding Virginia and District of Columbia areas through a network of bicycle and pedestrian improvements.”

Washington itself would receive $10 million for a roughly 3.8-mile South Capitol Street biking and walking trail south of Joint Base Anacostia-Bolling. And Prince George’s County, Maryland, would get funding to make upgrades at the New Carrollton multimodal transportation station.