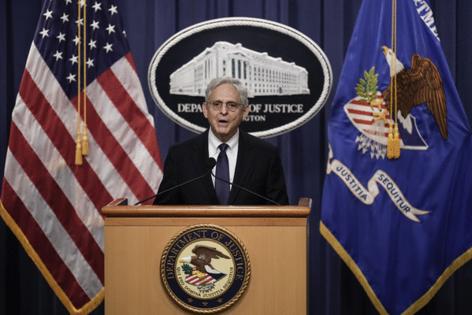 It is extraordinarily unusual for the Department of Justice to comment on an ongoing investigation, especially one involving such a high-profile person, and Garland did not take questions from reporters. The motion to unseal the warrant was filed as he spoke. A judge must rule before the warrant can be unsealed.

Garland indicated he was driven to act by the misinformation around the search.

The FBI did not disclose the daylong search of Trump’s Florida estate. Trump announced it had occurred in a statement, referring to the court-sanctioned search as a “raid,” inflaming the far right, who have accused the FBI and Department of Justice of becoming politicized.

Trump will have the opportunity to contest making the warrant and list of recovered documents public — in its motion, the Department of Justice proposed giving the former president until Aug. 25 to do so. Federal Magistrate Judge Bruce E. Reinhart gave the department until 3 p.m. Eastern time Friday to report back as to whether Trump’s legal team plans to contest unsealing the warrant.

Trump’s legal team has acknowledged having in its possession the warrant and receipt since Monday’s search but has not provided specific detail on the contents of the documents.

The department’s motion states that it is moving to unseal the information primarily because Trump confirmed that the search had occurred and because his lawyers have spoken publicly to reporters about what the FBI sought.

“This matter plainly ‘concerns public officials or public concerns’ ... as it involves a law enforcement action taken at the property of the 45th President of the United States. The public’s clear and powerful interest in understanding what occurred under these circumstances weighs heavily in favor of unsealing,” the motion states.

Garland told reporters that the Department of Justice prefers to speak through legal filings rather than public statements.