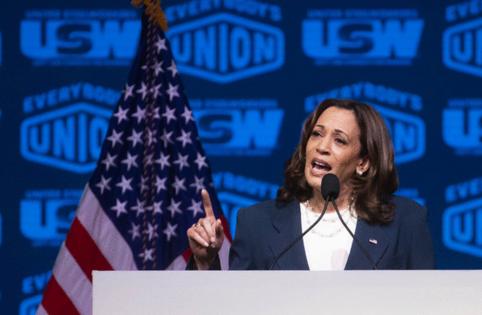 Harris slammed the Supreme Court for taking away the right to abortion that was afforded by Roe through its recent Dobbs decision. And she decried ”extremist” leaders who are using the court’s decision to pass bans on abortions, even in cases of rape or incest.

“But not in California,” Harris added. “Here we have leaders who understand the importance of the principles upon which our nation was founded.” She stressed that the government should not make such decisions for women.

Harris’ remarks came during her ongoing nationwide tour on reproductive rights — a tactic that aims to rally Democrats around the issue of abortion access ahead of the November midterm elections. It comes less than two months after the Supreme Court overturned its landmark 1973 Roe v. Wade ruling and shifted the decision of whether to allow abortions to each individual state.

In appearing in San Francisco — a place where she once served as district attorney, across the Bay from her hometown city of Oakland — Harris met with about 30 state lawmakers and sought to ensure that California remains a save haven for abortion rights, even as dozens of other states outlaw the procedure.

The visit comes on the heels of a head-turning vote by Kansans that rejected an amendment to their state’s constitution, which would have ended the constitutional right to an abortion in the Sunflower State. Many political observers say the move signaled an unexpected opening for Democrats to capitalize upon in the upcoming midterm elections — contests that, until just a couple weeks ago, appeared to be leaning heavily in Republicans’ favor.

In stops across several states, including Florida, New Jersey, Nevada, Pennsylvania, Virginia and North Carolina, Harris has extolled the need for safe and easy access to abortions. Often, she’s framed the issue as a health care crisis — one that cuts against the nation’s principles of freedom and liberty.

The vice president saved some of her moist pointed remarks for a late-July roundtable gathering in Indiana, where she called steps to remove abortion ban exceptions in cases of rape or incest “outrageous,” according to a transcript from the White House. Even if people oppose abortion for religious issues, she stressed “the government should not be telling an individual what to do, especially as it relates to one of the most intimate and personal decisions a woman could make.”

Her visit came ahead of the nation’s first special legislative session for state lawmakers to consider new restrictions on abortions since the Supreme Court’s decision a month earlier. Days later, Indiana lawmakers narrowly voted to ban nearly all types of abortions in the state, except in some cases of rape, incest or when the pregnant person’s life is at risk, according to the Indianapolis Star.

At least 14 states have moved to tighten or outright ban access to abortion since the Supreme Court’s ruling in late June, according to the New York Times. Most of those states are in the South and Midwest, where Republican governors have tried for decades to restrict access to the procedure.

California ranks as among the most accessible states for people seeking abortions. The state enshrined women the right to access an abortion in its constitution decades ago — protections that, experts say, could lead to an influx of women into California from other states where access is crumbling.

In anticipation of that rush for services, Planned Parenthood clinics across the state have beefed up staffing, while Gov. Gavin Newsom has made a series of moves to make it even easier for people to obtain abortions here, such as by eliminating out-of-pocket costs for abortion-related services.

On Thursday, Harris praised those moves as a model for other states to follow.