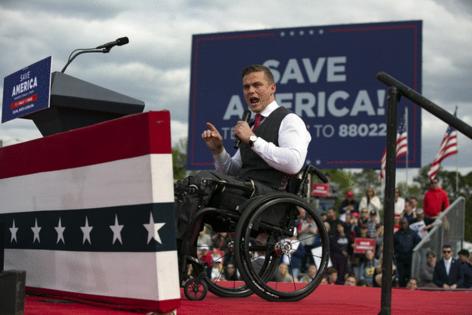 WASHINGTON — If Rep. Madison Cawthorn doesn’t turn in his campaign finance report by Sunday, federal election regulators will deem it so late that there’s no hope of receiving it.

And the regulatory agency has already put Cawthorn on notice that he’s racking up a hefty fine for taking his time.

Debbie Chacona, assistant staff director with the Federal Election Commission, addressed the matter with Cawthorn in a letter dated Aug. 1. Normally, such a letter would go to a candidate’s treasurer, but Cawthorn, a one-term congressman, gave himself that position not long after he lost his reelection in the May primary.

“The civil money penalty calculation for late reports does not include a grace period and begins on the day following the due date for the report,” Chacona told Cawthorn.

The report was due on July 15.

Chris Cooper, a political science professor at Western Carolina University, discussed with McClatchy the importance of these reports.

“From a legal perspective, it is to make sure that somebody is following the law, which clearly he’s not by failing to file on time,” Cooper said. “That’s an indicator of immature behavior from an elected member of Congress.”

He added these reports show what candidates do with donors’ money.

“Campaign accounts do not simply appear out of thin air,” Cooper said. “They are given to them by sometimes PACs and special interest groups, but also regular people and if Madison Cawthorn is not willing to show where he spent his contributors’ money, it does show a disregard for their interests.”

Cawthorn’s spokesman Luke Ball has left Cawthorn’s staff and referred all questions to the email of Cawthorn’s chief of staff, Blake Harp, who did not respond to emailed questions from McClatchy.