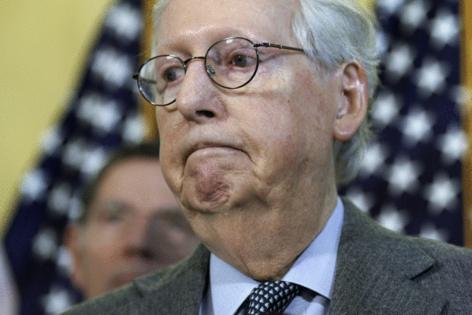 WASHINGTON — As political reaction reached a boil over the FBI’s search of former President Donald Trump’s Mar-a-Lago estate, Mitch McConnell was standing in Eastern Kentucky attending to the aftermath of calamitous flooding there.

McConnell initially offered no comment on the legal predicament of his nemesis. But saying nothing only stoked Trump allies with frustration, suspicion and conspiracy theories.

“Republican LEADER Mitch McConnell has remained SILENT about the storming of the HOME of a Republican president,” tweeted Newsmax media personality Benny Johnson.

Several hours later on Tuesday evening, McConnell’s office produced a 38-word statement that asked for rapid transparency from the Justice Department but steered clear of any political judgment.

“The country deserves a thorough and immediate explanation of what led to the events of Monday,” McConnell said in the written statement. “Attorney General (Merrick) Garland and the Department of Justice should already have provided answers to the American people and must do so immediately.”

The furious conservative reaction – to McConnell’s reaction – on the latest potential turmoil engulfing the 45th president is a fierce reminder to the Senate GOP leader that often his most tenacious foes are from those inside his own party’s tent who continue to place unwavering loyalty to Trump over government institutions and law enforcement.

McConnell’s response was glaringly muted compared to that of House Minority Leader Kevin McCarthy, who charged the Justice Department with “weaponized politicization” and promised investigations of the search if the GOP retakes control of the lower chamber next year.

On Wednesday, as he continued touring flood damage, McConnell reiterated the need for an explanation from Garland on what prompted the search of Trump’s home.