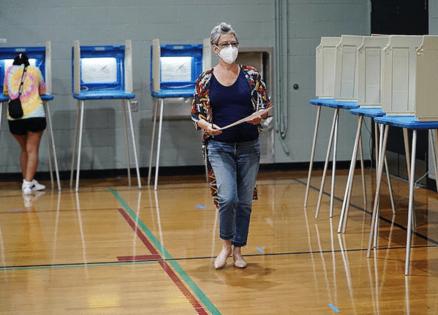 Finstad, a former U.S. Department of Agriculture official, and Ettinger, the former CEO of Hormel Foods, were vying to complete the term of the late GOP U.S. Rep. Jim Hagedorn, who died in February after suffering from kidney cancer.

If elected, Finstad will represent Minnesota's 1st District until January. And he and Ettinger will hold a rematch in November, with the full two-year congressional term on the line. The two were poised to win their respective parties' primary elections, which were also held Tuesday.

"I enjoy every day I spend with my family, friends, and neighbors in southern Minnesota," Finstad tweeted Tuesday morning. "I am asking for your vote, to be your voice in Congress."

The 46-year-old Finstad was the U.S. Department of Agriculture's state director for rural development in Minnesota during the Trump administration and served in the Minnesota House from 2003-2009. He also spent time as executive director of the Center for Rural Policy and Development, and in a leading role with the Minnesota Turkey Growers Association. Finstad and his family own agronomy company Frontier Labs and have a farm where they grow soybeans and corn.

Ettinger, 63, is a first-time political candidate from Austin, Minnesota, who served as Hormel's chief executive from 2005-2016. Under Ettinger's leadership, Hormel's annual revenue nearly doubled. He's a moderate who's donated to both Democrats and Republicans in the past.

"Thanks to everyone for your remarkable support for the past five months," Ettinger tweeted shortly after polls closed Tuesday night. "No matter the results this evening, we are incredibly proud of what we have built here."

At Finstad's election-night party in Sleepy Eye Tuesday, Bryce and Shelly Boelter of New Ulm said they liked Finstad over other candidates because of his willingness to negotiate with rather than attack Democrats.

Finstad also stood out to the Boelters because of his agricultural experience, his stance as an abortion opponent and his Christian values, they said.