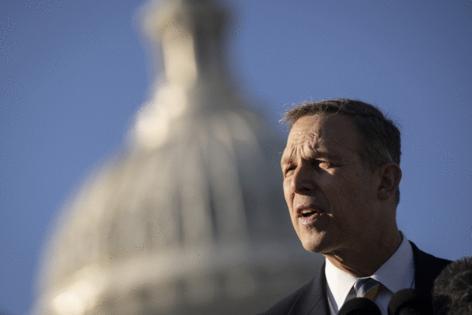 Perry said he was traveling with his family Tuesday morning when he was approached by three FBI agents with a warrant for the contents of his phone. He called their actions “outrageous” and complained that they had not first contacted his lawyer, saying he would have willingly cooperated if given the chance.

“I’m outraged — though not surprised — that the FBI under the direction of Merrick Garland’s DOJ, would seize the phone of a sitting Member of Congress,” Perry said in a statement. “My phone contains info about my legislative and political activities, and personal/private discussions with my wife, family, constituents, and friends. None of this is the government’s business.”

The basis for the search, which was first reported by Fox News, was not immediately clear. Though search warrants typically identify the potential crimes agents are investigating, Perry did not elaborate in his statement — nor did he say whether he or his attorneys had since been informed whether he was a target or a subject of an ongoing probe.

FBI officials did not respond to requests for comment, but it is routine for them not to discuss details of ongoing investigations.

In recent weeks, the Justice Department has widened its investigation into the events surrounding Trump’s efforts to maintain power and overturn the 2020 election — a series of events in which Perry has been shown to have played a central role.

Agents have interviewed several of the pro-Trump electors from Pennsylvania and other states in recent weeks.

And in June, agents searched the homes of Jeffrey Clark, a Philadelphia-born Justice Department lawyer whom Trump had sought to install as attorney general to advance his baseless election fraud claims. They’ve also seized the phone of John Eastman, the attorney behind a Trump plan to send alternate slates of electors from battleground states to the Jan. 6, 2021, certification of the vote in Congress.

Like Trump and Perry, Clark and Eastman have dismissed the investigation as political and attacked the FBI’s tactics. It is not uncommon, however, for FBI agents serving a search warrant not to notify potential targets or attorneys in advance, often over concerns about the destruction of evidence.

Perry was one of the leading figures in Pennsylvania pushing to undermine the state’s election results, and on Jan. 6, 2021, led the charge on the House floor to throw out the state’s electoral votes, and the will of its voters.

In between, he was in frequent contact with top Trump administration officials at the Justice Department, urging them to investigate debunked conspiracy theories about widespread election fraud, evidence presented by the congressional committee investigating the Jan. 6 attack on the Capitol has shown.

He has also emerged as a key figure in Trump’s briefly considered move to install Clark at the helm of the Justice Department.

Perry was one of several GOP House members who contacted the White House in the waning days of the Trump administration to inquire about a potential presidential pardon, according to video testimony played during the committee’s hearings this summer.

But Perry has denied that, saying he never asked for a pardon.

He has been asked to testify before the committee, but has thus far refused to do so, saying the body has no legal authority.