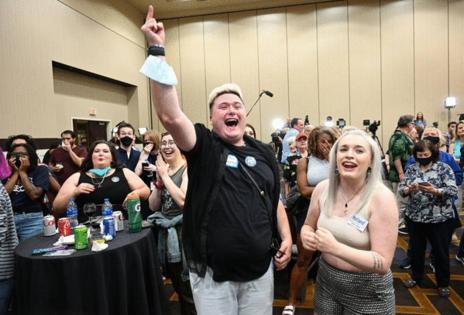 Kansas voters surprised the nation and reframed the midterm elections by voting overwhelmingly against removing abortion rights from the state constitution. It was a sharp rebuke in the wake of the U.S. Supreme Court’s reversal in June of Roe v. Wade, the court’s landmark abortion decision, and while it’s premature to speculate on the impact nationwide, the result rightly emboldens Democrats and Roe supporters to make abortion a defining choice for voters in November.

Tuesday’s referendum marked the first time Americans voted on abortion in the post-Roe era, and the decisive margin in this reliably conservative state — 59 to 41 percent, with about 98 percent of the votes counted — has firmly moved abortion to a top-tier issue. The result was all the more surprising given that registered Republicans far outnumber Democrats in Kansas, a largely white, Christian and heavily evangelical state that typically supports Republicans for president. Crossover appeal for abortion rights in Kansas should give confidence to Democrats in more competitive states, including Florida.

The Kansas Supreme Court blocked a state law in 2019 that banned an abortion procedure, holding that the Kansas Constitution Bill of Rights protected a woman’s access to abortion. In reaction, the state’s supermajority Republican legislature put a referendum on Tuesday’s primary ballot that would have cleared the way for new restrictions. While a ban would not have gone in place immediately, lawmakers could have adopted one. The voters’ rejection on Tuesday effectively bars lawmakers from passing new restrictions and leaves a high legal hurdle for impeding access to abortion.

It’s dangerous to draw too much from a single vote in a single state, especially one as small as Kansas where less than 1 million people cast a ballot. Kansas voters may have feared the risks of an all-out ban. Moderates may have wanted the wiggle room the state constitutional protection provides. Democrats may have wanted to take this first chance in post-Roe America to launch an all-out push for abortion rights ahead of the midterms. Whatever the voters’ motivation, the result boomerangs far beyond Kansas, promising to fuel a robust three months before all 50 states vote in November.

As remarkable as the result was for the ruby-red state, the outcome showed Kansas largely in sync with Americans’ attitude toward abortion overall. Surveys show that a majority of Americans disapprove of the high court overturning Roe, with almost two-thirds saying that abortion should be legal in all or most cases. Gallup polling dating to the mid-1970s shows the biggest gains among Americans (35 percent) who think abortion should be legal under all circumstances and the biggest losses among those (13 percent) who favor banning it completely.

No wonder abortion rights have become such a hot issue in Florida’s Democratic gubernatorial primary, and no wonder abortion is shaping to mobilize voters this fall. Florida’s Republican governor and GOP-led Legislature guaranteed that abortion would be a signature issue with the law they enacted this year banning most abortion after 15 weeks, and without exceptions for rape, incest or human trafficking. It’s the the strictest prohibition passed in Florida during Roe.

Tuesday’s referendum shows how far some leading Republicans are out of step with their own party’s faithful and how powerful a driver abortion can be in turning out voters and getting them to cross partisan lines. Democrats have an opportunity to capitalize on these lessons — and Republicans to learn from them.

Editorials are the institutional voice of the Tampa Bay Times. The members of the Editorial Board are Editor of Editorials Graham Brink, Sherri Day, Sebastian Dortch, John Hill, Jim Verhulst and Chairman and CEO Conan Gallaty. Follow @TBTimes_Opinion on Twitter for more opinion news.