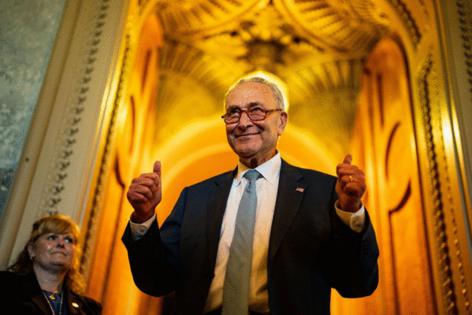 President Joe Biden and his party finally scored the win they’ve been waiting for heading into the November congressional elections, but it’s uncertain it will be enough to save them from the nation’s sour mood over inflation.

The tax and climate bill passed by the Senate Sunday was a shadow of the $10 trillion plan progressives sought more than a year ago.

Nonetheless it represents a cornerstone achievement of the president’s first term, even if the White House stayed on the sidelines as Senate Majority Leader Chuck Schumer and two moderate Democrats, Joe Manchin and Kyrsten Sinema, shaped its final form.

“I ran for President promising to make government work for working families again, and that is what this bill does,” Biden said in a statement after the vote. “It required many compromises. Doing important things almost always does.”

In a time of high inflation and looming recession, the higher spending and taxes also offer Republicans plenty to campaign against.

Biden’s economic agenda has been bookended by his early success in passing the American Rescue Plan, which Republicans blame for triggering the current inflation surge, and now the Inflation Reduction Act, which most outside analysts have concluded will have modest effects on reducing prices.

“Last year, Democrats jammed through trillions of dollars in reckless spending that fueled the worst inflation in 40 years. Now, Democrats insist on pouring fuel on the fire with another partisan tax-and-spending spree that will only further exacerbate a recession we’re already likely in,” Pennsylvania GOP Senator Pat Toomey said.

Getting there required Democrats to put aside more than a year of intraparty squabbling. They showed an unusual level of unity during a nonstop weekend marathon of votes on amendments, even rejecting proposals that in other circumstances most of them would have backed, in order to keep the bill — and the fragile coalition behind it — in tact.

Progressive Democrats swallowed provisions for fossil fuels and other items that they stood firmly against earlier this year, settling for what they consider half-measures to get something out the door before the fall campaigns begin in earnest in September.

Their House counterparts, who had been pushing hard for expansive action on climate change and more spending on social programs such as child care, have indicated they were ready to back the legislation when the chamber meets Friday for a vote on final passage. While many priorities were cut, the bill takes “real steps forward on key progressive priorities,” Representative Pramila Jayapal, chair of the Congressional Progressive Caucus, said in a statement.