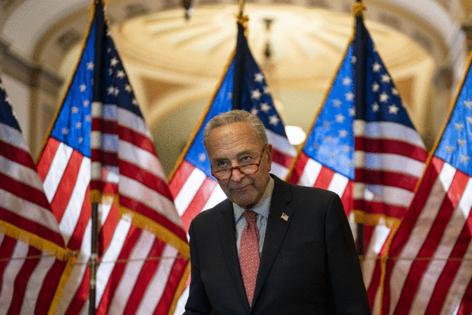 The tax and energy bill passed Sunday after a year and half of rocky negotiations that divided the party. It gives Democrats tangible progress on key issues to show voters in the midterm elections this November.

Biden’s popularity nose-dived a year ago in the wake of the haphazard Afghanistan pullout and rising inflation — and a year of infighting among Democrats over the domestic agenda. That squabbling is in the past and Biden can say a cornerstone of his agenda will become law.

Schumer was slammed last year for failing to unite his caucus behind Biden’s "Build Back Better" plan. He managed to revive a slimmed version of the deal, navigate last-minute holdups and blindside Republicans hours after they gave up leverage by allowing a bipartisan semiconductor bill to pass.

Here’s who else comes out on top and who takes a hit from the landmark bill:

None of the billions of dollars in tax increases Democrats floated a year ago on high-earning Americans made it into the final version of the bill, including proposals to double the capital gains rate, increase taxes on inheritances and levy a surcharge on millionaires. Despite rhetoric from Democrats that they wanted the richest Americans to pay much more, there wasn’t consensus within the party to pass a bill that raises levies on the 1%.

Private equity fund managers were able to dodge a tax increase that Sen. Joe Manchin wanted, but fellow moderate Democrat Sen. Kyrsten Sinema insisted be taken out of the bill. Manchin had wanted to narrow a tax break known as carried interest, that allows fund managers to pay lower capital gains rates on their earnings. The private equity industry was able to gain an additional win shortly before the final passage of the bill when a handful of Democrats broke with their party to vote on a Republican amendment that created a carveout for private equity-owned companies in the corporate minimum tax.

KANSAS CITY, Mo. — The Kansas Supreme Court was front and center this summer as Kansans prepared to vote on a constitutional amendment aimed at overturning the court’s 2019 decision that found a right to an abortion in...Read More

He will have a bit more time than that, but the New York Republican will serve in Congress for just four short ...Read More

Senate Republicans are bending over backward to block a bill that would tell the public who is giving large sums of money to groups that take out ads telling Americans to vote for or against candidates for federal office. ...Read More

While the Biden administration rushes to put the COVID-19 pandemic in the nation’s rear-view mirror ahead of the midterm elections, its premature decision to declare the pandemic “over” threatens to further erode ...Read More

The front-runner has now 50% of valid ...Read More