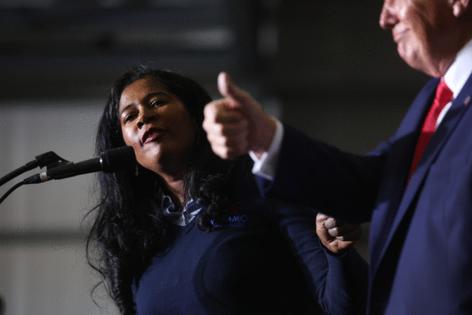 The event is a sign of Trump's emphasis on key races in the battleground state and on campaigns for positions that oversee elections.

The ex-president has been critical of Democratic Secretary of State Jocelyn Benson's handling of Michigan's 2020 presidential election, which he lost to Democrat Joe Biden by 154,000 votes, or 3 percentage points.

While Trump and his supporters have maintained unproven claims that fraud cost him the election, a series of court rulings, more than 200 audits and an investigation by the GOP-controlled state Senate Oversight Committee have upheld the result.

Trump will give remarks at the fundraiser for Karamo, according to an invitation document obtained by The Detroit News. Money raised at the event will go to Karamo's campaign account and a political action committee (PAC) called "Karamo SOS Fund," the document says.

That PAC was established in May, according to campaign finance records.

For $25,000 contributed or raised, donors can get a photo with Trump and Karamo, according to the invitation document. For $1,000, they can attend the reception featuring the former president.

Karamo's campaign confirmed Sunday that Trump is hosting a fundraiser for the candidate on Aug. 16.

"Kristina will fight for you like no other, and of equal importance, she will fight for justice," Trump said in a statement at the time. "Good luck Kristina, and while you're at it, check out the fake election results that took place in the city of Detroit."

Karamo gained national attention after raising concerns about what she said she saw working as a poll challenger in Detroit in November. She testified before the state Senate Oversight Committee on Dec. 1 and signed on to a brief that attempted to give the GOP-controlled Legislature the power to certify election results.

Trump participated in a similar fundraiser for Republican attorney general candidate Matt DePerno at his Mar-a-Lago property in Palm Beach, Florida, in March.

KANSAS CITY, Mo. — The Kansas Supreme Court was front and center this summer as Kansans prepared to vote on a constitutional amendment aimed at overturning the court’s 2019 decision that found a right to an abortion in...Read More

He will have a bit more time than that, but the New York Republican will serve in Congress for just four short ...Read More

Senate Republicans are bending over backward to block a bill that would tell the public who is giving large sums of money to groups that take out ads telling Americans to vote for or against candidates for federal office. ...Read More

While the Biden administration rushes to put the COVID-19 pandemic in the nation’s rear-view mirror ahead of the midterm elections, its premature decision to declare the pandemic “over” threatens to further erode ...Read More

The front-runner has now 50% of valid ...Read More