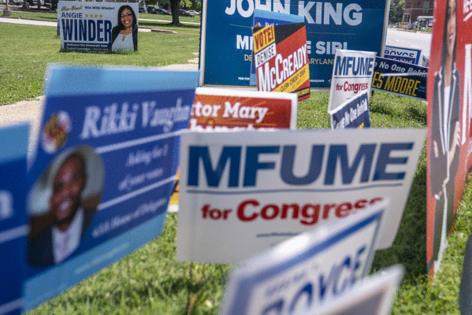 Some say they’re feeling the pinch of 9% inflation and can relate to voters for whom rising prices is a top-of-mind matter in this year’s midterm elections.

Kistner said that with flights and travel more expensive, that can influence campaign plans, including whether to make fundraising trips.

“So you’re doing less travel,” he said. Catering and food costs have also increased. And high gas prices sometimes factor into the campaign’s decisions about which events to attend. Still, campaign travel is up when compared with 2020, when the vast majority of candidates relied largely on Zoom events during the height of the COVID-19 pandemic.

“It’s a strain,” Kistner said of rising costs for campaigns. “Really the way I see it, it’s harder for everyday Americans to now run for office.”

This period of high inflation will ripple into the next election cycle, too.

Donation limits are already set for the 2021-2022 cycle at $2,900 per person per election, but the limits for the 2024 elections will rely on the rate of inflation this winter — meaning the individual donation limits will likely exceed $3,000 per election in the next cycle. A 2002 campaign finance overhaul, known as the McCain-Feingold law, indexed contribution limits for individual donors, but not company political action committees, to inflation.

“The next adjustment of the contribution limits will be in the winter months of 2023, when the limits will be set for the 2024 cycle,” said Michael Toner, a former Federal Election Commissioner who chairs the election law and ethics practice at law firm Wiley. “And because of inflation and the way it’s running so high, we might see a jump of $200 or $300. We’re certainly going to reach at least $3,000 per election for individual donations.”

The biggest expense for most campaigns is TV advertising time, which isn’t necessarily subject to the same economic forces as consumer goods, campaign operatives said. But the rate of inflation, the highest in four decades, comes as the price tag for campaigns was already increasing.