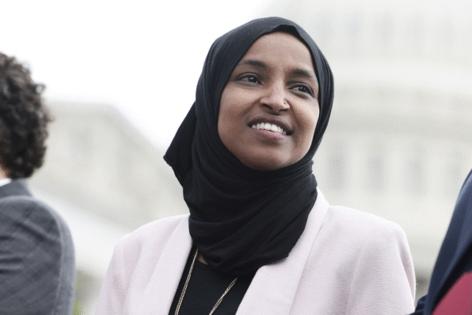 MINNEAPOLIS — Don Samuels is waging his Democratic congressional primary battle against nationally known U.S. Rep. Ilhan Omar with the hope that Minneapolis voters will reject her campaign like they did last year's contentious policing ballot measure.

"That was the straw, actually, that kind of broke the camel's back for me, that the district wasn't going to be well served and that she could be in there for a long time," said Samuels, 73, a Jamaican immigrant who began organizing against gun violence about 25 years ago after a bullet pierced his north Minneapolis home.

Tuesday's DFL primary election in the Fifth District marks the latest chapter in the fight between moderates and progressives in Minneapolis and nationwide, as Omar and Samuels quarrel over how to reform policing, address crime and protect abortion rights after the U.S. Supreme Court overturned Roe v. Wade.

Just last month, Omar was arrested during an abortion rights protest outside the U.S. Supreme Court.

"I have always been on the front lines advocating for our liberties and freedoms to be extended in this country," Omar said.

The congresswoman said she is not surprised to face a second straight well-funded primary opponent. Her unapologetically outspoken approach, echoed by fellow members of the progressive "Squad," has made her a polarizing figure within the Democratic Party, often conflicting with her more moderate colleagues and drawing Republican criticism.

"When you push power, power pushes back," Omar said.