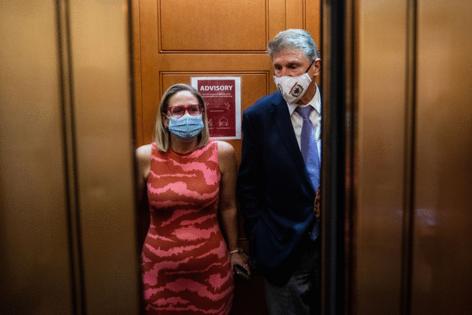 Medicare was cleared to negotiate drug prices for the first time by the Senate’s top rules official, though the Democrats’ proposal intended to cap price increases for prescription drugs in the commercial market was blocked.

The ruling is a partial victory for drugmakers, who could try to make up their lost profits in Medicare on private insurers.

The Senate parliamentarian, Elizabeth MacDonough, ruled that most of the drug price bill is eligible for a fast-track budget process whereby Democrats, who have a narrow majority in the chamber, can pass legislation without the threat of a Republican filibuster.

The drug price provisions are part of a budget bill that the Senate plans to begin debating later Saturday, representing a slimmed-down version of President Joe Biden’s multi-trillion-dollar domestic agenda.

“Democrats have received extremely good news: for the first time, Medicare will finally be allowed to negotiate prescription drug prices, seniors will have free vaccines and their costs capped, and much more,” Senate Majority Leader Chuck Schumer said in a statement.

Yet the Senate rules official disallowed some provisions meant to stop drug companies from raising prices at a rate faster than inflation. The inflation rebate is allowed to be applied to Medicare prices, but not in the commercial market according to two people familiar with the ruling.

A provision capping out-of-pocket costs for insulin at $35 per month for Medicare and private insurance is still under review, according to one of the people. The ruling on the inflation price penalty suggests the Senate official is likely to strike the cap in the private market as not closely related to the federal budget.

“I am disappointed that the calculation for the Medicare inflation rebate that included commercial units sold was ruled out of compliance, but the legislation nevertheless puts a substantial check on Big Pharma’s ability to price gouge,” Senate Finance Committee Chairman Ron Wyden, D-Ore., said in a statement.

With midterm elections looming in November, the tax, climate and spending package is on track for passage after a year of wrangling with moderate holdout senators Joe Manchin, D-W.Va., and Kyrsten Sinema, D-Ariz., over the contents.

The parliamentarian ruled earlier Saturday that energy tax credits, including for the purchase of electric vehicles, can be allowed in the bill.

WASHINGTON — The Supreme Court opened its new term on Monday by hearing a property rights appeal that calls for limiting the government’s power to protect millions of acres of wetlands from development.

At issue is ...Read More