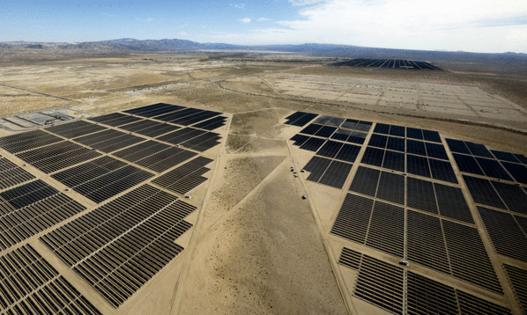 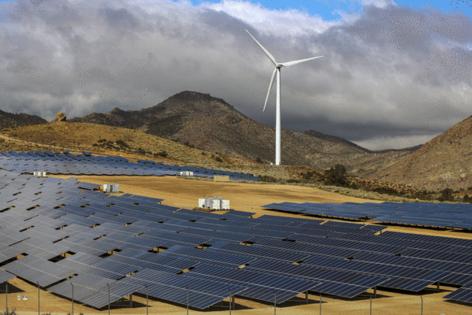 After decades of inaction on the climate crisis, the federal government is on the verge of enacting a sweeping plan to slash planet-warming pollution, with Arizona Sen. Kyrsten Sinema agreeing late Thursday to support the bill.

Now comes the hard part — or at least, the next hard part.

Phasing out coal, oil and natural gas — the fossil fuels largely responsible for the climate crisis — will require building huge amounts of clean energy infrastructure, including solar farms, wind turbines, lithium-ion batteries and electric power lines. The Senate bill sets aside nearly $370 billion to support those technologies and others that could help reduce carbon emissions.

But finding good spots to put all those renewable energy projects — and contending with opposition from nearby landowners, Native American tribes and even environmental activists — could be just as challenging as getting a bill through Congress.

Across the country, local opposition has slowed or blocked many renewable energy facilities. And land-use conflicts are likely to intensify. Princeton University researchers estimate that zeroing out U.S. carbon emissions by 2050 could require installing solar panels and wind turbines across more than 225,000 square miles, an area much bigger than California.

“There’s this misperception that there’s plenty of land,” said Eric O’Shaughnessy, a renewable energy researcher at Lawrence Berkeley National Laboratory. “That is true, but (solar and wind farms) have to go in specific places.”

The Senate deal, known as the Inflation Reduction Act, should accelerate America’s renewable energy buildout. It was the product of months of negotiations between Majority Leader Chuck Schumer, D-N.Y., and Sen. Joe Manchin III, D-W.Va., and it needs support from all 50 Senate Democrats to overcome unified Republican opposition.

Sinema, the final holdout, now says she’ll “move forward” with the bill once it overcomes a final procedural hurdle.

The bill would extend and expand tax credits for companies to build and buy climate-friendly technologies, from solar and wind power to energy storage and carbon capture. Other provisions include $4,000 tax credits for buying used electric cars and rebates for homes that replace gas boilers with electric heat pumps. The bill would establish a “green bank” with a $27 billion budget, force oil and gas companies to pay fees as high as $1,500 a ton on methane leaks and pay farmers to change their practices.

Senate Democrats say it would help cut U.S. carbon emissions 40% below 2005 levels by 2030, assuming it passes the Senate and House and is signed by President Joe Biden. Independent analyses support that claim. Rhodium Group estimates emissions would fall 31% to 44%, compared to 24% to 35% under current policy. The research firm Energy Innovation offered a similar projection.

Those would be big cuts — but not enough to meet U.S. climate targets. Biden pledged to slash emissions at least 50% by 2030. Steeper reductions will be needed over the following decades to achieve the goals of the Paris climate agreement.

That won’t be easy. And if policymakers fail to grapple with local opposition to solar and wind power, it might not be possible.

Two recent studies help explain the sources of that opposition — and what might be done to alleviate local concerns.

The first study, from researchers at Massachusetts Institute of Technology, explored 53 renewable energy projects that were delayed or blocked over more than a decade. It found the most common sources of opposition were concerns about environmental impacts and land use.

California and neighboring states have seen both types of conflicts.

Some conservation groups have tried to block solar and wind farms in the Mojave Desert, citing potential harm to animals and plants such as desert tortoises, golden eagles and Joshua trees. Just this month, Ormat Technologies Inc. paused construction of a geothermal project in Nevada while federal wildlife officials study whether it would harm the endangered Dixie Valley toad.

Then there’s San Bernardino County — California’s largest by land area. Three years ago, it banned solar and wind farms on more than 1 million acres, spurred by locals who worried the sprawling projects would industrialize their rural communities.

Some clean energy advocates consider that type of opposition NIMBYism at best and thinly veiled climate denial at worst.

But Lawrence Susskind, an urban planning professor and the MIT study’s lead author, said local concerns of all kinds need to be taken seriously. His research has convinced him that speeding up the clean energy transition will be possible only if developers slow down and make a good-faith effort to gather input from communities before dumping solar and wind farms on them.

Too often, Susskind said, companies exclude local residents until the last minute, then try to steamroll opposition — to their own detriment. His study cited 20 projects that were ultimately blocked, some by lawsuits or other forms of public resistance.

“If you want to build something, you go slow to go fast,” he said. “You have a conversation, not a confrontation.”

That was the thinking behind the Desert Renewable Energy Conservation Plan, an ambitious government effort to map which parts of the California desert are suitable for solar and wind farms and which parts should be protected. The plan took eight years to complete and covered more than 10 million acres — and barely survived a Trump administration attempt to scrap it.

Renewable energy companies criticized the maps as too restrictive. But they didn’t take their complaints to court, and so far the desert plan seems to be standing the test of time. The Biden administration recently approved its third clean energy facility under the plan — a 500-megawatt solar plant, with 200 megawatts of battery storage, off Interstate 10 in Riverside County.

Photo-voltaic solar cells soak in the afternoon sun at the new 550-megawatt Desert Sunlight Solar Farm, in Desert Center, Calif. The project is one of the world's largest photo-voltaic solar farms on 3,800 acres of federal land in Riverside County.

Stanford University researchers hope to facilitate similar compromises for the rest of the country.

Stanford’s Dan Reicher told The Times he’s convened more than 20 groups and companies — representing the solar industry, environmental advocates, Native American tribes, the agriculture industry and local governments — in an “uncommon dialogue” to discuss land-use conflicts involving large solar farms. It’s modeled after a similar dialogue that Reicher convened for the hydropower industry and conservation groups, which led to an unprecedent agreement between those long-warring factions.

Reicher hopes the solar discussions will lead to companies to make smarter decisions about where to build projects — and do a better job communicating with local residents and conservationists when they think they’ve found good locations.

O’Shaughnessy agrees on the need for public engagement up front.

The Lawrence Berkeley researcher was lead author of the second recent study, which found that solar and wind farms typically get built in rural areas with low incomes — and those projects can be either a benefit or a burden to those communities, depending on local factors. Construction jobs and tax revenues can be a boon, while loss of agricultural land can be a big loss.

The potential harms from solar and wind energy pale in comparison to the dangers of oil and gas drilling and other fossil fuel projects, which unlike renewable energy can expose nearby residents to cancer-linked chemicals and other toxins. The low-income communities of color that have born the brunt of fossil fuel pollution are also especially vulnerable to climate change consequences.

But taking steps to make sure solar and wind farms in vulnerable communities don’t worsen ongoing injustices is important, O’Shaughnessy said. And it’s a priority for the Biden administration, which has set a goal of delivering 40% of the benefits of federal investments in climate and clean energy to disadvantaged neighborhoods — an initiative known as Justice40.

“There will be projects that move forward despite some degree of local opposition. That’s inevitable,” O’Shaughnessy said. “It comes back to making sure there are participation processes in place to do this as fairly and equitably as possible.”

They key question is whether enough clean energy can still be built fast enough to avert climate catastrophe.

Susskind, the MIT researcher, thinks it’s doable. He said renewable energy companies should be willing to redesign their projects to avoid sensitive lands and to offer financial compensation to people or businesses who feel they’re still being harmed.

“More stuff would get built faster,” he said.

Ben Norris, the group’s director of environmental policy, said in an interview that engaging with communities early — and giving them a real opportunity to be heard — is “the hallmark of good project development.” He said it’s an area where the solar industry is working to improve, in part through the Stanford initiative — and the Senate deal makes it more important than ever.

“This is such a historic opportunity that we’re on the cusp of that we need to get it right,” Norris said.

Not everything in the Senate bill has been embraced by climate activists.

To win Manchin’s support, Schumer included provisions that require continued oil and gas leasing on public lands and offshore, which activists have been fighting to shut down for years. Democratic leaders also agreed to support legislation designed to speed up permitting for all kinds of energy projects — including climate-disrupting natural gas pipelines and gas export terminals.

Rendering of the proposed liquefied natural gas expansion at the Energia Costa Azul facility near Ensenada, Mexico. The plant is operated by IEnova, a Mexico-based energy company and a subsidiary of San Diego's Sempra Energy.

As far as Energy Innovation is concerned, the bill’s benefits far outweigh its harms. The research firm estimates that for every ton of carbon pollution caused by the fossil fuel leasing mandates, 24 tons of carbon would be avoided by other provisions.

Michael Gerrard, founder of Columbia University’s Sabin Center for Climate Change Law, also thinks the tradeoffs are worthwhile. The best way to cut down on oil and gas production, he said, is to reduce demand for the fuels — and the Senate bill does that.

The separate permitting bill could also be helpful, Gerrard said, because it could streamline approval of clean energy projects.

“Local opposition has emerged as one of the major inhibitors of [solar and wind farms],” Gerrard said. “Trying to clear away those obstacles is extremely important, even if it is at the price of making it somewhat harder to fight new fossil projects.”

Gerrard pointed to the Telecommunications Act of 1996 as a possible model for speeding solar and wind development. The law prevented local governments from banning cell towers and required them to approve or reject towers within a few months.

It also prohibited local governments from rejecting cell towers because they emit electromagnetic fields, or EMFs — a type of radiation that has spurred fears of cancer and other health problems, despite a lack of strong evidence to support those fears. Gerrard thinks similar rules could be helpful for solar and wind projects dogged by misinformation over alleged health effects.

“Whether it’s wind farms or vaccines or elections, people don’t always listen to evidence,” he said.

“Going to communities early and trying to engage them — it’s helpful,” he added. “But it’s not a guaranteed silver bullet.”