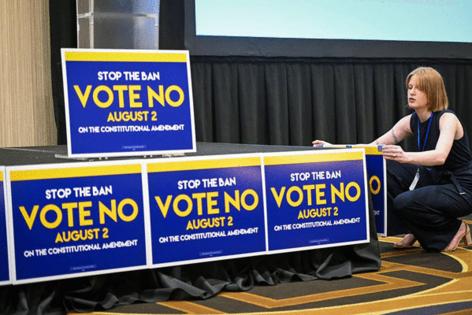 Democrats nationwide latched onto Kansas’ resounding affirmation of abortion rights as a sign of good things to come.

The first referendum on abortion in a post-Roe America, Kansas is seen as a bellwether of voter opinion on the issue heading into the November midterms.

The vote was a major win for abortion rights advocates in the state. But in Kansas it remains to be seen whether their momentum will translate to Democratic wins in November when the party will attempt to break up the Republican supermajority in the Legislature and re-elect Gov. Laura Kelly and U.S. Rep. Sharice Davids.

Democrats seem to think so. Several emerged from Tuesday’s vote energized that it was a sign that the U.S. Supreme Court decision eliminating the federal right to an abortion will continue to motivate voters and help the party overcome qualms about record inflation and high gas prices.

The message will be simple, that Tuesday’s vote was a battle and the war rages on.

Six of Kansas’ seven supreme court justices are up for retention in November. Anti-abortion activists could seek to oust Democratic appointed judges. They could also pursue another constitutional amendment, or more anti-abortion legislation.

“This is an ongoing fight and we’re fighting against an opponent who knows how to run a solid war of attrition,” state Rep. Stephanie Clayton, an Overland Park Democrat, said Wednesday. “They said last night we will be back and I believe them.”

Kansas Senate Minority Leader Dinah Sykes, a Lenexa Democrat, said Tuesday night she was hopeful the momentum could translate to achievements on other progressive priorities like Medicaid expansion.

“When we really get the grassroots groups out and we show up, we show that Kansans really care about each other,” she said.

But holding together that coalition could be easier said than done - a voter’s opinion of the amendment does not necessarily mean they will return to vote in November or that they will vote with Democrats.

Kansans for Constitutional Freedom, the organization which led the fight against the amendment, focused on turning out a wide swath of voters that wasn’t constrained by party lines.

“Kansans had a unique opportunity to protect their constitutional rights and freedom at a time when those rights had been stripped at the federal level,” said Ashley All, the spokeswoman for the organization. “I think that really did motivate and mobilize voters and, again, more moderate voters and maybe even conservative and libertarian voters.”

How will Schmidt and other Republicans message after vote?

Both Democratic Gov. Laura Kelly and her Republican opponent, Kansas Attorney General Derek Schmidt, stayed fairly quiet about abortion ahead of the primary.

Speaking to reporters last week, Kelly said she didn’t think abortion would be a major issue for voters in November.

“I think what people in Kansas are going to be voting for in November is the issues that matter for them the most, education, transportation, inflation,” Kelly said. “I think that something like the amendment that’s on the ballot today has sparked a lot of interest and I expect that that interest will now carry over into November just as a result of understanding how important voting is.”

Kelly’s campaign reaffirmed that position in a statement Thursday, saying that voters would want their politicians focused on other things.

C.J. Grover, Schmidt’s campaign manager, said in an email that the campaign would “focus on many other issues important to Kansans.”

“The constitutional amendment question has been answered and I think in November there will be other issues,” said Mike Kuckelman, chairman of the Kansas Republican Party. “The November election is going to be driven by Biden policies … there’s been no change in that whatsoever.”

“This was an opportunity for voters who typically vote Republican to express their opinion on a policy issue,” Miller said. That won’t necessarily reflect how they feel about a specific candidate or political party.

Miller said Tuesday’s vote should signal to Democrats that they can spend more time talking about abortion than they have been. Republicans, he said, are in a difficult situation.

Abortion bans moving from hypothetical to reality, as they have in Missouri and Oklahoma, is unpopular. Miller noted that Kansans for Life and the Kansas GOP have been inseparable for decades and that it’s difficult to walk away from the issue as the politics surrounding abortion have changed.

“The policy positions that Republicans have been advancing on abortion recently, they are minority opinions.”

Davids and Adkins battle in the 3rd District

Some Democrats were already leaning hard into the abortion rights issue. In the buildup to the vote on the constitutional amendment, Rep. Sharice Davids’ supporters canvassed the district for the “vote no” campaign, a practice run for the get out the vote efforts they’ll need in November.

Davids, Kansas’ sole Democrat in Congress, co-sponsored a U.S. House bill that would codify a federal right to an abortion and prevent some restrictions currently in place in Kansas, like banning waiting periods before someone can get an abortion.

With Tuesday’s result, where “No” votes outnumbered “Yes” votes in Franklin County and Miami County — rural counties in Davids’ redrawn district that former President Donald Trump won with about 68% of the vote in 2020 — Democrats are even more inclined to lean into the issue.

“This week, Kansans across the Third District showed up in record numbers to reject extreme anti-choice positions like those advocated by Amanda Adkins, sending a loud message: they don’t want politicians interfering in their private healthcare decisions,” Davids said in a written statement.

Nationally, Democrats have focused their midterm messaging on highlighting extreme stances on abortion taken by Republicans, like enacting bans that don’t have exceptions for rape or incest.

Democrats are highlighting Adkins’ role as chairwoman of the Kansas Republican Party from 2009 to 2013 at a time when the party platform included a call for a “human life amendment,” in which some versions call for banning legalized abortion in all states.

Adkins also served as the 2004 U.S. Senate campaign manager for Brownback, who took a hard-line approach to abortion in both the Senate and as governor.

“We look forward to reminding Kansas voters every day until November that Adkins has supported banning abortion without exceptions for rape and incest since her days as a top advisor to Sam Brownback,” said Johanna Warshaw, a spokeswoman for the Democratic Congressional Campaign Committee and former Davids staffer.

Adkins’ campaign is arguing that abortion won’t have the same impact in November, now that the status quo in Kansas is that abortion rights are protected. They are betting that voters will be more concerned with the economy than with abortion, giving them an advantage as they attempt to tie Davids to the unpopular president.

“The Supreme Court ruling in Dobbs made it clear that each state’s voters and legislators are responsible for abortion laws - not Washington - and Kansans decided against the constitutional amendment,” Adkins said in a statement. “I have spoken with voters across the district, and they have shared time and again that they want a representative who listens to their concerns, not Biden’s.”

Adkins supported the constitutional amendment. She has said she supports the U.S. Supreme Court’s decision to allow states to establish their own abortion laws and is against federal legislation banning abortion.

Jan Kessinger, a moderate Republican who lost his seat in the Kansas House after voting against placing the amendment on the 2020 ballot, said he felt vindicated by the vote.

But he didn’t anticipate a changing tide in Kansas legislative races come November. Anti-abortion voters would come out in force, he said, but the open question is whether abortion rights voters would.

(The Star’s Lisa Gutierrez and Jonathan Shorman contributed to this report.)