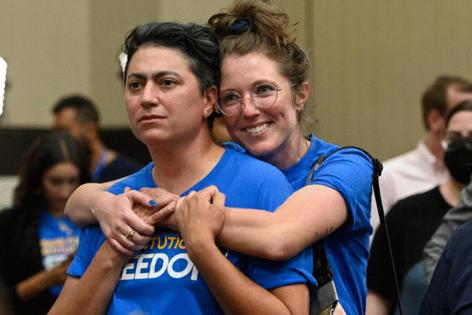 Translation: In the first clean test since the Supreme Court overruled Roe v. Wade and killed a national right to abortion, people went to the polls to preserve, not erode, that freedom. That this happened in Kansas, where registered Republicans outnumber registered Democrats 850,000 to 500,000, only underlines the be-careful-what-you-wish-for scenario for anti-abortion crusaders.

Trump, the president whose appointments to the Supreme Court made the end of Roe possible, has privately groused to friends and advisers that the curtailing of abortion rights will be “bad for Republicans.” As awkward as it is to admit, he’s often been an astute reader of the public mood.

The strong showing affirming abortion rights is closely aligned with national opinion polls, which show about 60% of Americans backing women’s right to choose. People may not like it when pregnancies are terminated, but majorities understand that would-be mothers have agonizing decisions to make — and overwhelmingly make them early in their pregnancies. Forty-three percent of abortions happen in the first six weeks of gestation, 79% in the first nine weeks, and 92% by the end of the first trimester. The vanishingly small remainder are wrenching cases in which pregnant women are deciding between terrible options.

Never mind that, Republican legislators are barrelling ahead to bar abortion in ways out of sync with their voters’ preferences. Abortions are now illegal or heavily restricted in at least 13 states, with horror stories emerging not only of a 10-year-old forced to travel from Ohio to Indiana to terminate an embryo produced by rape, and a Tennessee woman forced to travel to end a highly risky pregnancy of a fetus destined to die immediately outside the womb — but of women who’ve suffered miscarriages but been unable to get the treatment required because doctors feared violating state abortion laws.