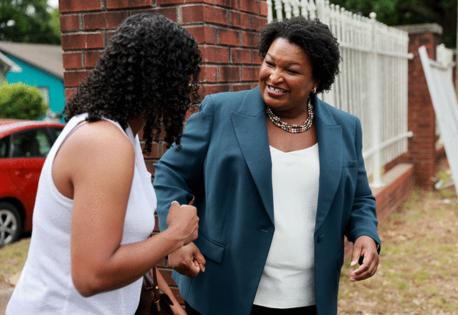 In Georgia's close, unpredictable elections this year, Libertarian Party candidates could be the wild cards.

Since Georgia requires a candidate win with a majority of all votes, Libertarians could force Republicans and Democrats into runoffs this fall.

A poll last week by The Atlanta Journal-Constitution showed Libertarian hopefuls getting the support from as many as 7% of likely voters in some races.

While Republicans had dominated runoffs in the past in Georgia, Democrats Raphael Warnock and Jon Ossoff won runoffs in early January 2021 for Georgia's U.S. Senate seats.

Libertarians say they can make a difference as they try to appeal to voters who value personal liberty and small government, especially after Georgia's law limiting abortions took effect last month.

"You can see in the polling that everybody kind of hates the two major parties and increasingly don't like where the country is going," said Ryan Graham, the Libertarian candidate for lieutenant governor and a former party chairman. "We are giving voice to an underrepresented voting bloc in America."

There are 10 Libertarians on the ballot this November in statewide races, including for the U.S. Senate, governor and secretary of state.

But voters won't have a Libertarian choice in any congressional and legislative races because of Georgia's ballot access laws, which are among the strictest in the nation. No third-party candidates have ever been able to run for the U.S. House under a 1943 state law that requires them to gather signatures from 5% of registered voters.

"I could have shook things up, but instead we're going to have Marjorie again for another two years," Pence said. "A Democrat isn't going to win in this district, but a Libertarian could have given her a run for her money. It's going to take enough people or the system getting so bad that they're finally willing to change it."