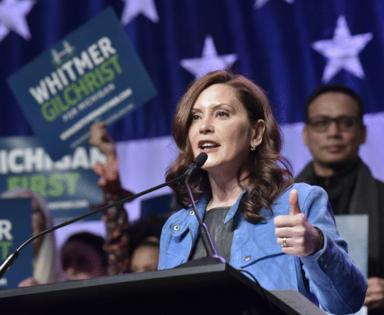 DETROIT — Michigan Gov. Gretchen Whitmer vetoed a bill that would have required her and future governors to set special election dates for state lawmaker seats within 30 days of their vacancy, a move that Republicans described as unexpected and protecting her own power.

The Republican-led Legislature had advanced the legislation by former state Rep. Andrea Schroeder, an Independence Township Republican who wanted to make sure constituents didn't go long without representation in Lansing after a lawmaker left office early.

Schroeder died Oct. 1 from cancer, and Whitmer announced on Dec. 14 that she would hold special primary and general elections to fill her seat and those of two other legislators in March and May, two Republicans and a Democrat.

Following the 2020 November election in which Republican state Sens. Pete Lucido and Peter MacGregor were elected to county positions, Whitmer waited until January 2021 to announce special primary and general elections for August and November.

"House Bill 4996 places restrictions on the executive branch’s exercise of its constitutional authority," Whitmer said in her veto statement. "I will not tie the hands of future Michigan governors."

Republican leaders and lawmakers were quick to criticize the veto statement released Friday.

“Rep. Schroeder always had the people’s best interests at heart — that’s why she sponsored this bill to make sure people would have a voice in the Legislature in a timely manner when a special election was needed," said Rep. Mike Harris, a Clarkston Republican, who ended up winning Schroeder's seat. "House Bill 4996 won broad bipartisan support in the Michigan House of Representatives. It had nothing to do with limiting a governor’s authority, and I am extremely disappointed Gov. Whitmer would characterize it that way.”

"This is a complete surprise and a big disappointment," Wentworth spokesman Gideon D'Assandro said.

"Andrea Schroeder just wanted to make sure the people who lived in her community were taken care of and not left without a voice for months on end. She wanted someone to look out for them even when she knew she wouldn't be able to do it herself. But apparently that concern and those residents lost out to the governor's need to protect her own power."

But the Democratic governor said she based her decision on protecting the power of the office, which could be held by Democrats, Republicans or another party.

WASHINGTON — A senior Democratic lawmaker said he hasn’t seen any evidence that materials the FBI seized from Donald Trump’s home were properly declassified, casting doubt on the former president’s explanations.

Adam Frisch is down in the polls but undeterred.

The math is simple enough. There’s a way for him to beat incumbent U.S. Rep. Lauren Boebert, he said. That is, if he can meet enough voters in the district face-to-face, ...Read More

We’ve become so numb, so accustomed to the sliding scale of right and wrong practiced by Donald Trump that it can be hard to see where the line is anymore.

But the news coming out of Mar-a-Lago after...Read More

LOS ANGELES — Ana Lopez was 14 when her mother shared some gossip about a woman in their Huntington Beach neighborhood who, rumor had it, had gotten an abortion.

"How could they kill that innocent baby?" Bertha Valdez ...Read More