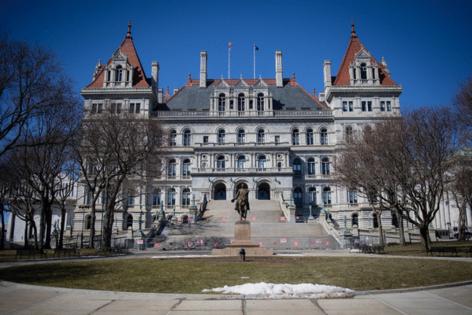 The legislature passed a measure (S. 51002) to expand the list of classes protected by the state’s constitution. If the proposal survives its next steps, voters as soon as next year would get a say on barring discrimination based on race, color, ethnicity, national origin, age, disability, creed, religion, or sex, including pregnancy, pregnancy outcomes, reproductive health care and autonomy, sexual orientation, gender identity, and gender expression.

The amendment aims to prohibit discrimination that results from the actions of state government, corporations or institutions, according to the bill text.

“It was no longer a kind of let’s argue about semantics,” state Senate Majority Leader Andrea Stewart-Cousins, a Democrat, said speaking to the news media following the bill’s passage in the Senate. “It was more about let’s get it done to send a message, not only to New Yorkers who expect to have their freedoms protected, but also again, to lead on the state level to let people know that state legislatures really have power and we need to exert that power in order to protect our residents.”

The action comes after the highest court in a 5-4 decision June 24 overturned the landmark 1973 Roe v. Wade decision that established abortion rights.

Gov. Kathy Hochul, a Democrat, called the special legislative session June 24 to protect “the rights of New Yorkers to make decisions about their own bodies,” which she said were threatened by the Supreme Court ruling.

“Unfortunately, this bill solidifies the message that New York has been sending women for some time now: Abortion is positive, empowering, and the key to success. This couldn’t be further from the truth,” said Kristen Curran, state Catholic Conference director of government relations in a Friday statement. “New York State should be pouring resources into helping women and families, not promoting abortion through limitless funding, advertisements, and splashy legislation.”

The amendment still must be approved by another session of the legislature. If that happens in 2023, the question could go on the ballot as soon as that fall.