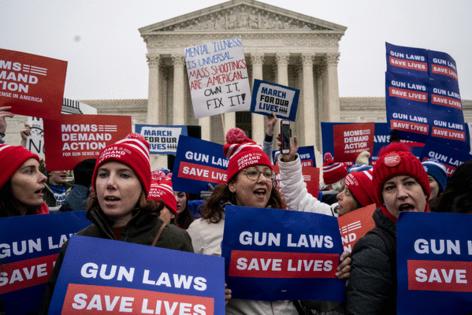 Guns, according to the latest data from the Centers for Disease Control and Prevention, are the most common cause of death among Americans under the age of 25. The Supreme Court, in ruling that it is unconstitutional for the state of New York to require gun owners to obtain a permit to carry a concealed handgun in public places, made it much more likely that this trend will continue.

Justice Clarence Thomas’s majority opinion — signed by six of the nine justices — relies on the incorrect interpretation in the 2008 District of Columbia v. Heller ruling by Justice Antonin Scalia, which ignored the Second Amendment’s history and its preamble.

In the late 18th century, Americans feared standing armies and centralized government. “[O]n both counts they wanted to make sure that the states would be allowed to have armed militias,” wrote legal scholar Richard Posner.

The Heller decision reinterpreted the Second Amendment as an individual right to keep a handgun for defense of “home and hearth.” Scalia claimed to be an originalist, but as Posner explained, “The irony is that the ‘originalist’ method would have yielded the opposite result.” That is, Scalia should have recognized that the amendment provided a collective right to gun ownership in connection with service in a militia.

The context and language of the Second Amendment are militaristic, including the much-repeated phrase “bear arms.” In a Washington Post article, Dennis Baron cites two large English databases from the founding era that confirm that “Non-military uses of ‘bear arms’ are not just rare—they are almost nonexistent.”

Nothing in the Second Amendment makes it unconstitutional for states to regulate the carrying of guns in public places.

In a scathing critique of the court’s New York state decision, Fordham University historian Saul Cornell complained about its “intellectual dishonesty and ignorance of basic legal historical method and well established facts.” The conservative justices on the bench, he said, “appear most of the time to be making history by inventing it.”

The Bruen decision affects similar concealed-carry laws in five other states (California, Maryland, Hawaii, Massachusetts and New Jersey), impacting approximately a quarter of the U.S. population. In response, some of these states are rushing to pass new gun laws they hope the Supreme Court will accept.

But the court’s ruling is unclear. For example, the decision says that any new gun law must be like ones enacted historically. But how similar they need to be, and how many similar ones must have been enacted? Sorting this out will take expensive litigation for years.

Currently, the outlook for public safety is bleak. “Apparently no amount of evidence,” Cornell wrote, “is enough for (this Supreme Court) to support gun control.” As a result, deaths, serious injuries and violent crimes are likely to increase in states that, until now, have had laws that regulate the carrying of guns in public.

There’s already a precedent for this scenario: Research by Stanford University law professor John Donohue, for example, found that, within 10 years after states relaxed concealed-carry laws, violent crime rates increased by up to 15%.

It stands to reason that, as more people are able to freely carry handguns, more people will believe that they need guns for protection and, in turn, there will be more gun violence and deaths. Meanwhile, the gun industry will keep profiting off of the chaos, and will use that money to line the pockets of the politicians it wants to influence.

The only way out of this vicious cycle is for Americans to vote for candidates who understand and advocate for stricter federal, state and local gun laws, which are what actually make us safe, whether at home or in public places.

Griffin Dix, Ph.D., is co-chair of the Oakland/Alameda County Brady Chapter. His fifteen-year-old son, Kenzo, was shot and killed in 1994. This column was produced for The Progressive magazine and distributed by Tribune News Service.