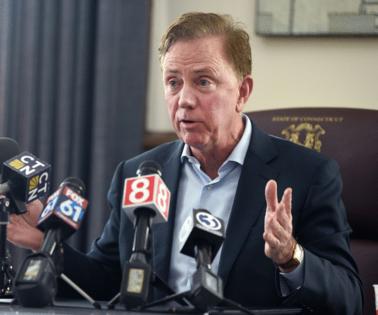 Gov. Ned Lamont and Lt. Gov. Susan Bysiewicz are linking abortion rights with economic development, issuing an invitation Friday to businesses to leave states with restrictive policies and move to Connecticut where access to abortion has been law for 32 years.

“Now more than ever is the time to look at Connecticut as the future home of your business,” they said in an open letter that opened with the salutation, “Dear business owners.”

The open letter was sent as a news release to members of the press in states where abortion has been banned or restricted, according to Max Reiss, Lamont’s spokesman.

“We have the workforce, the high quality of life and the values that we know will make you, your families and your employees feel welcome,” the governor and lieutenant governor said.

The Supreme Court decision, announced last week, that overturned the constitutional guarantee to abortion established in the landmark 1973 Roe vs. Wade decision, has “far-reaching implications for businesses and workers” in states likely to severely limit access to abortion, Lamont and Bysiewicz said.

“We are writing to any business owner that is disappointed in the stance of their current state. If you are looking to relocate to a state that supports the rights of women and whose actions and laws are unwavering in support of tolerance and inclusivity, Connecticut is for you,” they said.

Lamont and Bysiewicz invited businesses to contact AdvancCT, the public-private partnership promoting economic development. Their message included a video of Lamont making his pitch from his Capitol office.

The Democrats, who are seeking a second term this year, tried to tie abortion rights — a key issue to energize the Democratic base — with a fiscal policy that has steered clear of the party’s liberal and union constituencies, rejecting higher taxes the governor says has damaged Connecticut’s reputation in the business community.

In their letter, they cited other reasons to relocate to Connecticut: childcare, a paid family medical leave program, “tax stability” and “strong fiscal management.”

“I think it’s a bold act from an activist governor who is a social activist and a fiscal conservative,” she said.

In addition, Pastore said, abortion is an economic issue and the lack of access to the procedure will particularly affect poor women and communities of color.

It’s not the first time Connecticut officials have reached out beyond the state to capitalize on a contentious political issue. Then-Gov. Dannel P. Malloy invited North Carolina business owners in March 2016 to relocate their companies in response to a law critics have said is discriminatory toward the LGBT community.

Donald Trump faces intensifying legal and political pressure after FBI agents searched his Florida home in a probe of whether he took classified documents from the White House when he left office, casting a shadow on his ...Read More