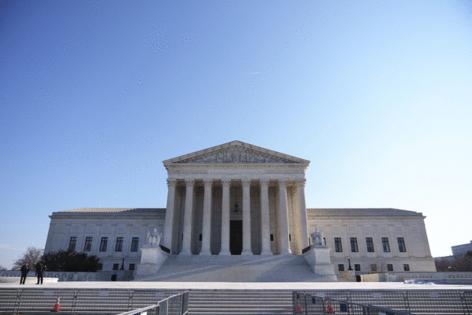 The Spirit of ’76 is alive and well at the Supreme Court. Back then, the colonials rejected the rule of a far-away, unaccountable government. After securing their freedom, they quickly organized a government that gave Congress, the duly elected representatives of the people, responsibility for making national policy decisions.

This week, the Supreme Court acted in accord with that spirit by rejecting a power grab by the Environmental Protection Agency and reserving for Congress the right to set far-reaching climate change policy.

The central question in West Virginia v. EPA came down to this: Who is responsible for determining if carbon emissions are a problem and whether something should be done about it? You may recall that President Barack Obama spent more than a year trying to convince Congress to pass a comprehensive bill to reduce emissions as a way of trying to stem climate change. Ultimately, he even threatened Congress, saying that if lawmakers didn’t act to reduce carbon emissions, he would – with his pen and his phone. Yet even though his own party had a House majority and a filibuster-proof majority in the Senate, Congress balked at capping carbon emissions.

Obama followed through on his threats in the form of the “Clean Power Plan” – the EPA’s proposal to force whole states and utilities to stop using fossil fuels in favor of less reliable, and often more expensive, sources like wind and solar. Always inventive, Obama asserted that the EPA could stretch the authorities in the Clean Air Act, written in 1970 to deal with toxic pollutants.

Up to that point, the law had been used to reduce toxic emissions source by source, using the best available technology. So, for example, the EPA could require an available scrubber be added to a coal plant to reduce sulfur dioxide. Now, Obama claimed, the EPA could use a systems approach and require states and utilities to switch fuel sources altogether, essentially completely remaking the entire electricity grid.

Several states, led by West Virginia, sued the EPA. They got their hearing before the Supreme Court this February. On Thursday, the court ruled that Congress must specify authority clearly for an agency to be authorized to implement a policy of such vast economic and political significance.

Justice Antonin Scalia once wrote that Congress does not “hide elephants in mouseholes.” Yes, agencies can “fill in the blanks” where they are given direction, for example, by setting the amount of sulfur dioxide that can come out of a coal plant. But they cannot take it upon themselves to change the entire electricity grid.

No matter what your view of climate change, we should all agree that Congress is the right venue to have this issue debated and decided. Unlike the EPA’s employees, who can’t be voted out of office, lawmakers are accountable to “We, the People.” Representatives and Senators can make compromises that include carefully considered trade-offs, and their work will endure past one administration.

President Joe Biden has pledged to reduce greenhouse gas emissions by 50-52% by 2030. My colleagues at The Heritage Foundation estimate that taking the steps needed to make such drastic reductions would result in nearly 8 million lost jobs in 2026, a 90 percent increase in gasoline prices, and a more than $7 trillion hit to the economy. That’s vast economic significance, indeed.

And it’s why the “elephant” of carbon capping policy should be debated by Congress, not advanced through rulemaking by unaccountable bureaucrats. In fact, carbon reductions have been debated repeatedly – and always rejected, including in 2006 and 2010. Some are not happy with that result, but their dissatisfaction should motivate them to persuade their neighbors of the wisdom of their policy.

Now, thanks to the West Virginia v. EPA decision, Biden’s climate plans and the inevitable trade-offs can be examined through hearings and a robust debate by representatives who are accountable to the people.

Derrick Morgan is the executive vice president of The Heritage Foundation.