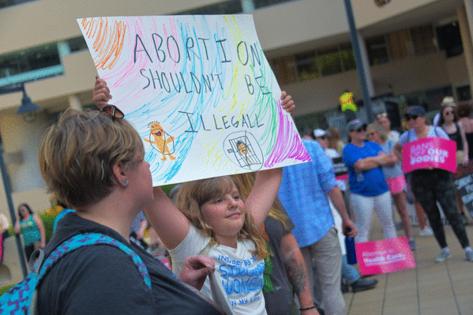 Abortion remains legal in Maryland, and providers are gearing up to accept a larger influx of people from other states seeking care here.

Baltimore Mayor Brandon Scott pledged $300,000 to help that cause immediately after the ruling was issued last week, with the money going to create an account at the Baltimore Civic Fund to provide grants to organizations that provide abortion and family planning services.

“This Supreme Court decision is a devastating blow to people around the country, particularly women of color, who will be disproportionately impacted,” said Danielle Torain, director of OSI-Baltimore and Open Society-US’s Leadership and Innovation Program, in a statement. “We are grateful for the city’s partnership in this effort, and we hope that funders and civic leaders around the country can come together on similar efforts.”

The group specifically said it was in discussions with the Baltimore Abortion Fund, a nonprofit that aids people in Maryland and from other states in arranging abortions and providing assistance for travel, lodging and other needs. The Baltimore fund is part of a national network of 80 such funds.

The group will take on a larger role, as people already have begun seeking services in Maryland from as far away as Texas now that the procedures are banned in many states. An estimated 26 states are expected to ban or curtail abortions following the court ruling that there is no constitutional right to the procedure.

In the past year, due to increasing restrictions before the Roe decision was overturned, about half of the fund’s clients came from outside of Maryland, said Lynn McCann, spokeswoman for the Baltimore Abortion Fund. The trend is expected to accelerate now, she said.

She also cited the effects specifically on minority groups and people with low incomes.

“Abortion access is both an urgent and ongoing public health crisis,” McCann said. “For years, escalating attacks on reproductive care have disproportionately harmed people of color, those with limited incomes, and other groups that already face discrimination in our health care system.”