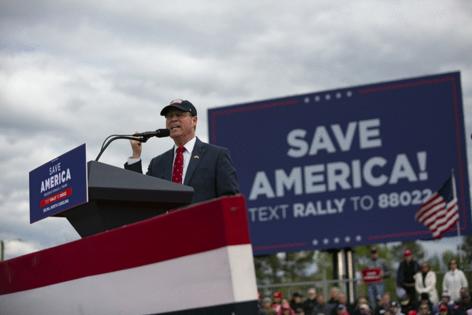 Nobody should ever have to justify why they want or need an abortion. But there are some circumstances, such as rape and incest, that make it even more unconscionable to deny pregnant people of their fundamental right to choose.

And now that the Supreme Court has chosen to overturn Roe v. Wade, undoing nearly 50 years of federal abortion rights, some Republicans are trying desperately to justify a decision they boldly and unapologetically support.

In a now deleted tweet, Rep. Greg Murphy, a Republican who represents North Carolina’s 3rd Congressional District, boldly proclaimed that “no one forces anyone to have sex.”

The tweet, which was published Sunday, stayed up for two hours before Murphy eventually deleted it, according to ProPublica’s “Politwoops” database, which tracks deleted tweets by public officials and candidates for public office.

It should go without saying that people do force other people to have sex, and it sometimes does result in an unwanted pregnancy. Nearly one in five women has experienced completed or attempted rape during their lifetime, according to research from the CDC. Many men are victims of rape, too.

Murphy should know this, because in addition to being a congressman, he is also a doctor. He’s a urologist who attended medical school at UNC-Chapel Hill, served as chief of staff of Vidant Medical Center and has held several prominent board positions, according to the biography on his website.

Maybe in a perfect world, sexual assault survivors would never have to choose whether to terminate a pregnancy because they never would have been raped in the first place. But that’s not the world we live in. Murphy’s erasure of this reality is shameful and wholly unbecoming of any public official, let alone one who purports to use his medical expertise to advocate for his constituents. Besides, it shouldn’t matter whether someone was forced to have sex or not. What a person chooses to do with their body should be just that — a choice — and they shouldn’t have to give birth unless they want to.

But no matter how Republicans try to justify the ruling, the reality is that most North Carolinians and most Americans aren’t buying it. The latest polling indicates that 59% of Americans disapprove of the Supreme Court’s decision. A strong majority of voters say it makes them more likely to vote in November, with 51% saying they would definitely vote for a candidate who would support a federal law to restore the right to an abortion.

Republicans know that. They’re facing the political reality that this is not an issue that helps them, and they’re responding poorly. And in doing so, they’re showing us exactly who they are.

PHILADELPHIA — Recently retired Supreme Court Justice Stephen Breyer has been named the honorary co-chair of the of the National Constitution Center’s board of trustees, where he joins Justice Neil Gorsuch, who has ...Read More

WASHINGTON — The Department of Justice is moving to unseal the search warrant and the itemized receipt of what was taken from former President Donald Trump’s Mar-a-Lago residence earlier this week, Attorney General ...Read More

WASHINGTON — The Department of Justice is moving to unseal the search warrant and the itemized receipt of what was taken from former President Donald Trump’s Mar-a-Lago residence earlier this week, Attorney General ...Read More

PHILADELPHIA — Federal subpoenas and search warrants delivered to Republican lawmakers in Pennsylvania this week were the subject of some confusion, and a bit of clarity.

It's become tiresome to see progressive politicians act like a pouting teenager who seems to think it's a sin to ever admit satisfaction with anything. Their lukewarm reaction to Senate passage of the admittedly ill-named ...Read More