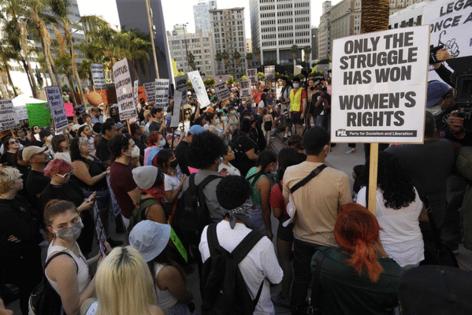 There are virtually no precedents in American law in which a right — declared fundamental by the Supreme Court — was erased. While the court has overhauled constitutional protections before, the complete retraction of the right to abortion sets the nation on a course it has never seen.

From 1910 to 1937, the court recognized a right to freedom of contract, but this rarely functioned as a liberty for workers — often, the court used this “right” to strike down laws protecting workers. And in the 1970s, four years after ruling that the death penalty as applied in the U.S. was unconstitutional, the court reinstated capital punishment after states revised their laws to meet the court’s requirements, leading to the executions of more than 1,500 people in the decades since.

But the court has never so clearly recognized a constitutional right and then simply wiped it away.

That this right belongs to women is no accident. The court’s opinion in Dobbs v. Jackson Women’s Health Organization says almost nothing about equality for pregnant people — Justice Samuel A. Alito Jr.’s majority opinion rejects arguments about abortion and sex equality in a single paragraph. It hints that striking down the right to abortion will be unpopular, and perhaps dangerously so. But the conservative justices made it quite clear that it is not their job to worry about what the public thinks. If most Americans did not want this to happen, the court quite simply does not care.

We often think of courts as expanding rights — such as protection from racial discrimination in public schools in 1954, or the right to use contraception in 1965, or marriage equality in 2015. It might be no surprise that when we think of the protection of rights, we tend to think of courts.

But the rise and fall of Roe tells a more complicated story about where our rights come from, and what we can do to defend them.

Historically, the Supreme Court has almost never acted in a vacuum. The decisions we attribute to the court, good or bad, have come in the middle of broader social movement mobilizations, with strategies that unfolded not just in the courts but in the legislatures and on the streets.

There would never have been a Brown v. Board of Education, the landmark school desegregation decision, without the civil rights movement. Arguably, the Civil Rights Act of 1964, which sought to root out workplace discrimination, set out rights as fundamental as the one protected in Brown.

There never would have been a Roe v. Wade without the women’s movement and the broader abortion-rights movement that it helped to fuel. Feminists held speak outs and told deeply personal stories about abortion; people marched and lobbied state legislatures. Doctors chafed under laws that they already disobeyed.

In his majority opinion in Roe, Justice Harry Blackmun points to this social upheaval and suggests that the court’s reasoning — in articulating a constitutional right — rose above the political fray and might settle broader conflicts about abortion.