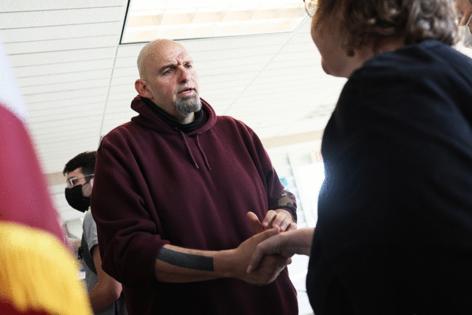 HARRISBURG, Pa. — It was the U.S. Supreme Court decision that Republicans had been seeking for 50 years. But its timing couldn't have been worse, some political analysts told the Post-Gazette following Friday's landmark ruling.

Before the high court overturned abortion as a constitutional right, Republicans were expecting a big sweep in November's midterm elections. Democrats, after all, continue to fail to address record-high inflation and gas prices.

But the ruling now gives Democrats an issue that they can use to turn out voters in their favor, the experts said.

Pennsylvania is one of 28 remaining states that will continue to allow most abortions; here, it's up to 24 weeks into a pregnancy. Even before Friday's decision, the state already had two of the most-watched races in the country, including one for a U.S. Senate seat that could potentially flip control of the chamber.

Now, abortion access will be front-and-center as an issue in Pennsylvania leading up to the general election in November. In addition to the Senate race, whoever wins the governorship will wield the veto pen — a defense current Gov. Tom Wolf, a Democrat, has used to block abortion-restricting legislation during his two terms in office.

"While it's a terrible decision by the Supreme Court and terrible for our country, politically it's really going to help (Democrats)," said Mike Mikus, a Pittsburgh-based Democratic strategist.

The Republican gubernatorial nominee, state Sen. Doug Mastriano, wants Pennsylvania to ban abortion after six weeks into a pregnancy, or the time when a fetal heartbeat can be detected. He does not support any exception, including in instances of rape, incest or if the life of the mother is in danger. The Democratic nominee, state Attorney General Josh Shapiro, said he would veto any bill that would restrict abortion in the state.

The Democratic U.S. Senate nominee, Lt. Gov. John Fetterman, opposes any legislative effort to restrict abortion in the country. He supports ending the filibuster to achieve this and other top Democratic policies. Republican nominee and celebrity doctor Mehmet Oz has said he believes "life begins at conception," but he supports some exceptions to an abortion ban in the case of rape, incest or risk to the mother's life.

Each candidate's stance will be under the microscope as Democrats work to redirect the election to this sole issue.