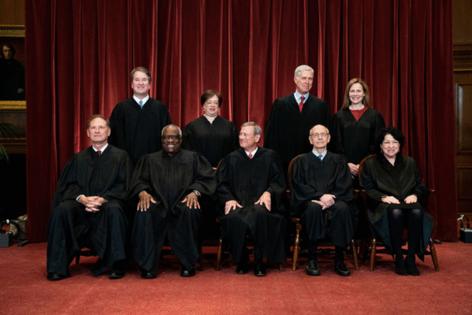 PITTSBURGH — The U.S. Supreme Court’s decision Friday to overturn Roe v. Wade could do lasting damage to the institution’s legacy as it signals a changing approach to precedent, according to legal experts.

In ruling that there is no constitutional basis for legal abortions, the court went back on nearly 50 years of precedent and made a decision that hits “at the core of people’s personal lives,” said Dara E. Purvis, a law professor at Penn State University.

The 6-3 decision in Dobbs v. Jackson Women's Health Organization concluded that the right to abortion cannot be found in the Constitution, thus overturning Roe v. Wade — the 1973 case legalizing abortion nationally — and Planned Parenthood v. Casey, a 1992 ruling that created the standards by which the abortion right was legally analyzed.

“I think this term has done lasting and, possibly, irreversible damage to the legitimacy of the court in the eyes of the public,” Purvis said in an interview Friday.

The court’s willingness to “destabilize” established law like Roe v. Wade goes against many philosophies about precedent, Purvis said, with generations of women having grown up in a world in which access to abortion was assumed due to the protections provided by the landmark decision.

Under that assumption, people “don’t have to open a newspaper every morning to see what rights you have today,” she said. Rulings such as the one last week show that those precedents, once stable, are no longer safe.

Justice Samuel Alito’s majority opinion does make efforts to say the issue of abortion is different and separate from other privacy-related cases the court has examined.

“And to ensure that our decision is not misunderstood or mischaracterized, we emphasize that our decision concerns the constitutional right to abortion and no other right,” Alito wrote. “Nothing in this opinion should be understood to cast doubt on precedents that do not concern abortion.”

But Purvis said much of his opinion is written “incredibly broadly” and gives no indication that the court will stop at overturning Roe.

That means the conservative-leaning court could begin to re-examine other cases in which the right to privacy was used as a basis for decisions, from same-sex marriage to contraceptives.