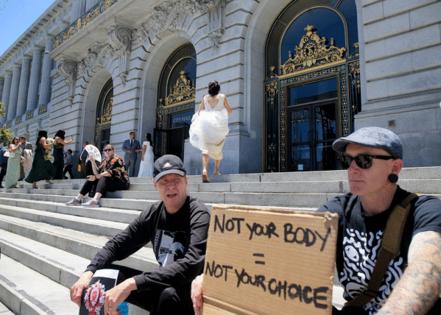 SAN JOSE, Calif. — Long before the Supreme Court’s bombshell decision Friday overturning Roe v. Wade, transforming reproductive rights for the first time in 50 years, California had laws protecting access to an abortion within its own borders.

Now, with Friday’s ruling, Democratic leaders are rapidly moving to shore up and expand access to abortion during this year’s legislative session, taking steps to protect doctors and secure the state’s “safe harbor” for those seeking abortions.

Legal experts predict courtroom battles between California and other states over whether doctors can be sued or prosecuted. Legislation would protect providers and further safeguard access to the procedure for Californians and an expected influx of out-of-state patients, they said.

But they also warn that Californians could be vulnerable to restrictions if a future Congress aims to whittle access.

“Nothing protects us from action that Congress might take to restrict reproductive rights,” said Donna Crane, adjunct professor, Department of Political Science at San Jose State University and former vice president of NARAL Pro-Choice America. Because of the Constitution’s Supremacy Clause, she said, “we cannot protect ourselves from a government at the federal level that’s intent on taking our rights away.”

Critics such as the California Family Council say that California lawmakers are promoting “abortion tourism” and fiercely oppose the use of taxpayer funds to expand access to the procedure. Such efforts will incentivize more California women to get abortions and encourage out-of-state residents to come to the state for the procedure, they warn.

At a press conference, Newsom signed a bill that prevents civil actions from other states against those in California who receive, perform or aid in abortion services. Assembly Bill 1666, sponsored by Assemblymember Rebecca Bauer-Kahan, D-Orinda, protects doctors, nurses, Uber drivers and others from civil liability judgments based on claims made in anti-abortion states.

Also on Friday, leaders reaffirmed the effort to get an amendment to the state constitution that would prohibit the state government from denying or interfering with a person’s decision to have an abortion or use contraceptives. It’s a two-step process. First, the Senate and Assembly would need to pass the amendment with a two-thirds vote. Then it would be put on November’s general election ballot, where it would need support from a majority of voters.

The state is also providing millions of dollars in grants to providers and health clinics that offer reproductive services for Californians and out-of-state patients.