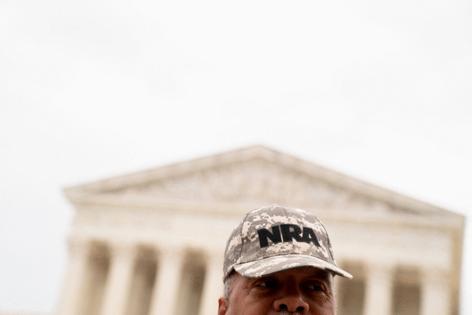 The U.S. Supreme Court’s decision establishing for the first time a constitutional right to carry a handgun outside the home for self-defense is a bright spot in what’s been a bleak time for the National Rifle Association.

The gun rights group has faced unprecedented challenges in recent years. They include financial strain and an investigation and lawsuit brought by the New York State attorney general alleging fraud and misuse of the nonprofit’s funds by Wayne LaPierre, who has led the NRA since 1991, and other senior executives.

The concealed carry victory Thursday in a suit filed by one of its affiliates is “much needed wind beneath the NRA’s wings,” said Adam Winkler, a UCLA law professor and author of “Gunfight: The Battle over the Right to Bear Arms in America.” Still, the victory alone isn’t likely to help the organization rebound.

“Not until Wayne LaPierre is removed from that position are they going to be making any kind of comeback,” former NRA lobbyist Richard Feldman, who is now president of his own gun rights group called the Independent Firearm Owners Association, said ahead of the court’s ruling on Thursday.

The NRA remains defiant in the face of litigation and calls for the removal of LaPierre, its executive vice president. The board of directors at the May annual meeting voted to re-elect LaPierre, 54-1, after he avoided a no-confidence vote pushed by members opposed to his continued leadership.

In a statement provided prior to the Supreme Court decision, NRA spokesman Andrew Arulanandam said the organization is thriving and emerged from the pandemic “strong, secure and successfully fulfilling our mission.”

“Based on the turnout from our recent Annual Meeting in Houston, NRA members are eager to return to our grassroots activities, participate in firearms education and training, and engage in events and competitions. All of this bodes well for 2022 and beyond,” Arulanandam said.

The NRA has been embroiled in litigation since New York Attorney General Letitia James sued in 2020 following a 15-month investigation. The suit alleged self-dealing by LaPierre and others at the top who she said exploited the nonprofit’s charitable mission to enrich themselves and benefit a close circle of NRA staff, board members, and vendors.