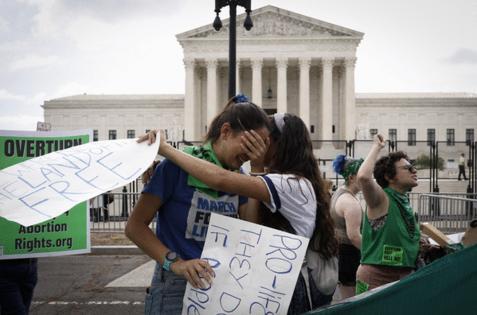 Amazon announced in May it would cover up to $4,000 in travel expenses related to medical procedures including abortion services. That policy is retroactive to Jan. 1 for employees and their dependents covered by two company-offered health plans. The funds could go toward services rendered if care is not available virtually or within 100 miles of an employee's home.

The company did not respond to requests for comment on Friday.

Microsoft said it would "continue to do everything we can under the law to support our employees and their enrolled dependents in accessing critical health care."

It did not say whether it will change its data practices to improve privacy for people seeking abortions, a concern experts expressed when the U.S. Supreme Court draft opinion on Roe v. Wade was leaked.

Meta, Facebook's parent company, said Friday it intends to reimburse employees' travel expenses "to the extent permitted by law." Some lawmakers have started considering legislation to stop people from traveling to other states to end their pregnancies.

"We are in the process of assessing how best to do so given the legal complexities involved," Meta said in a statement.

Google wrote in a letter to employees Friday its benefits plan and health insurance would cover out-of-state medical procedures that are not available where an employee lives or works. It added that employees could apply for relocation without justification.

The company said it would "continue our work to protect user privacy."

The Alphabet Workers Union, which represents some workers at Google's parent company, Alphabet, called on the company Friday to end financial support for conservative politicians who are "anti-reproductive justice & anti-worker."

"Abortion access is a labor issue," the union wrote on Twitter. "This decision is a direct attack against millions of working people—particularly workers of color as those with resources will continue to access safe abortions. Today's decision will not stop abortions—it will only criminalize working people."

The leaders of Amazon Labor Union, the first union at an Amazon warehouse in the U.S., echoed the sentiment. President Christian Smalls tweeted on Friday "Women rights are Labor rights." Chairman Derrick Palmer added that the ruling was confirmation that "the people is all we have left to make positive change in this country."