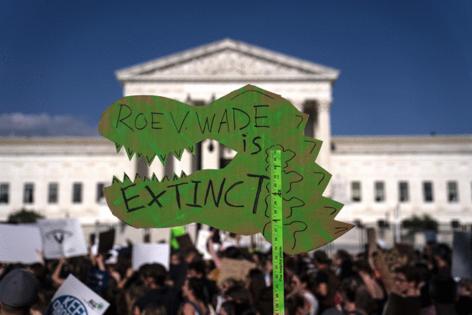 Now that the U.S. Supreme Court has overturned Roe v. Wade, the landmark 1973 decision that protected the constitutional right to an abortion, it won’t just be harder for women to get the procedure — states have also been lying in wait with tough penalties for anyone that will provide the care. Some experts warn that those seeking abortions could also become vulnerable to harsh consequences.

In Louisiana, doctors providing abortions face up to 15 years in prison under a trigger law designed explicitly to take effect under the fall of Roe. And in Texas and Oklahoma, those who help someone receive an abortion are vulnerable to lawsuits from “vigilante” citizens who have been deputized by so-called bounty laws.

While most states with restrictive abortion laws have so far abstained from criminalizing people seeking abortions, that often doesn’t stop prosecutors from targeting them. Charges can range from child endangerment to practicing medicine without a license.

Meanwhile, some healthcare providers are also tasked to report behavior that is considered as endangering a pregnancy to law enforcement, the abortion-rights group National Advocates for Pregnant Women notes, a practice that disproportionately impacts Black women and other pregnant people of color. And all of that could ramp up now that Roe is no longer the law of the land.

Experts and healthcare providers worry that the current environment will scare people out of seeking reproductive care overall, as well as create distrust between patients and the institutions and groups that want to help them.

“Any time somebody tries to criminalize anybody for accessing care that they need — or for folks either providing information or actually providing that care — it is a very scary scenario to be in,” said Bhavik Kumar, a doctor and a board member for the abortion-rights advocacy group Physicians for Reproductive Health. “Whether it's the intent or not, when politicians are legislating medicine in this way, by criminalizing it, it does have a chilling effect.”

Louisiana Governor John Bel Edwards on Tuesday signed a law that criminalizes the act of providing an abortion in every case, with no exceptions for rape or incest. Under the law, known as Senate Bill 342, doctors who provide any kind of abortion care would be subject to up to 15 years in prison depending on how far along a patient’s pregnancy has progressed. It was signed as a trigger law, and stipulated that the new restrictions would go into effect immediately if and when Roe fell.

The Louisiana law is among the most extreme examples of what pro-abortion advocates call TRAP laws, or targeted regulations of abortion providers. Such laws range from placing onerous and extraordinary regulations on abortion providers that have little to do with the scope of the care they provide, to requiring that doctors maintain admitting privileges at nearby hospitals.

Such laws are “a legitimate concern for providers,” said Alina Salganicoff, director for women's health policy at the Kaiser Family Foundation. “They could potentially be prosecuted.”