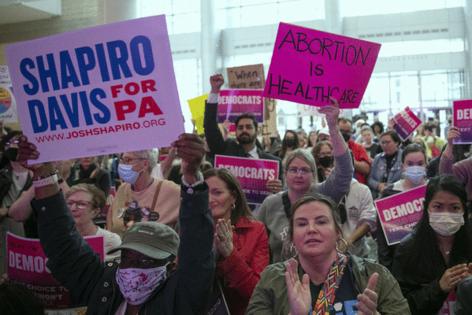 PHILADELPHIA — The U.S. Supreme Court’s decision Friday overturning Roe v. Wade thrust the races for the governor and state legislature in Pennsylvania into the spotlight as both parties gear up for a midterm campaign that will decide the fate of abortion access in the state.

The court’s ending of a national constitutional right to abortion that had been recognized for 50 years jolted the political landscape ahead of the November general election and underscored the role that state races will have in shaping women’s health care and reproductive policy. It could also affect the campaign for Pennsylvania’s open U.S. Senate seat, which will help determine control of the chamber.

The stark contrast between gubernatorial candidates was clear Friday within minutes of the issuance of the court’s opinion. GOP State Sen. Doug Mastriano, who has said banning access to abortion without exception is his top issue, took to Facebook to write, “Praise the Lord!” and released a statement saying Roe was “rightly relegated to the ash heap of history.”

Meanwhile, state Attorney General Josh Shapiro, a Democrat who has vowed to keep the procedure legal, tweeted it was “devastating day in America” and asked for donations.

The men are running to succeed Gov. Tom Wolf, a term-limited Democrat who leaves office in January. In his seven years in office, he has vetoed three bills passed by the Republican-controlled General Assembly that would have further restrict abortion access in the state.

Shapiro on Friday said he’d do the same.

“It is clear, based on the makeup of the legislature, that we’ll be in a defensive posture, meaning they’ll be sending us bills to do away with abortion rights in Pennsylvania,” he said.

Republicans in the GOP-led legislature signaled they’re considering votes on bills that could change access to abortion, which is generally allowed through about 24 weeks into a pregnancy. Lawmakers have in recent years advanced a handful of bills, including one that would prohibit abortion after ultrasound screening picks up an embryo’s cardiac activity, which can happen as early as six weeks into a pregnancy and before many are aware they’re pregnant.

GOP House Speaker Bryan Cutler and House Majority Leader Kerry Benninghoff, a Republican, said in a joint statement Friday that the ruling “once again makes clear it is the authority of individual states to establish laws that are in the best interest of their residents.”

“This ruling presents a necessary opportunity to examine our existing abortion law,” they wrote, “and discussions around possible changes are already underway.”