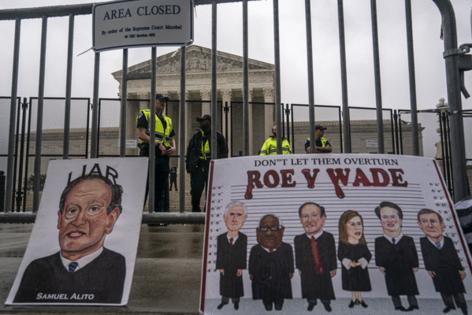 Women and LGBTQ people woke up on Friday to a world in which their rights to prevent pregnancies, have sex and marry could vanish with the stroke of a Supreme Court ruling.

The U.S. Supreme Court opinion reversing Roe v. Wade released Friday took away the constitutional right to an abortion, leaving states to decide the issue. The 200-plus-page package delivered by the court also contains something even more chilling: a concurring opinion penned by Justice Clarence Thomas arguing the court “should reconsider” other rulings that codified rights to same-sex relationships and marriage as well as access to contraception. The court based Roe v. Wade and these other rulings — Griswold v. Connecticut, Lawrence V. Texas, and Obergefell v. Hodge — on the 14th Amendment’s due process clause.

Under Thomas’ reasoning, Friday’s ruling elicits the revision of all similar precedents.

He wrote that “...we have a duty to ‘correct the error’ established in those precedents.” He spoke for himself, not the other five conservative justices, but his opinion is an implicit invitation for red states to pass laws that run afoul of those precedents in hopes of reversing them.

His writing confirms fears that the overturn of Roe v. Wade is just the first shoe to drop in the court’s usurpation of rights we thought were woven into the fabric of our society. The court’s three liberal justices echoed that concern, writing in their dissenting opinion that “no one should be confident that this majority is done with its work.”

For women who couldn’t care less about the end of Roe v. Wade — thinking they’d never have an abortion, anyway — it’s time to start caring. Thanks to the 1965 Griswold v. Connecticut ruling, the middle-aged men who run most state capitols cannot prohibit you from accessing birth control.

But, c’mon, women take the pill like they take vitamins nowadays. Who would ban contraception? Probably people like the governor of Mississippi, who won’t rule that out, or Republicans who tried to stop Missouri’s Medicaid agency from paying for the morning-after pill and IUDs.

These are the kinds of politicians in control of many state legislatures, which, without constitutional protections, would be in charge of deciding what happens to contraceptives, same-sex relationships and same-sex marriage. That would create a divide in America, where your liberties are dictated by the state in which you live.

And Florida isn’t looking too good.