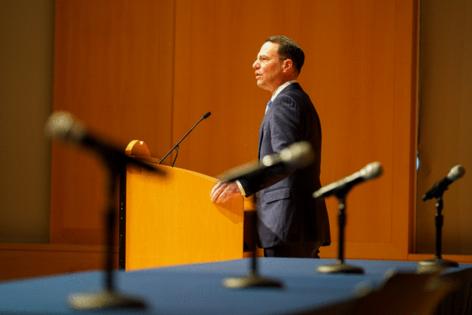 PITTSBURGH — FBI agents interviewed the chairman of the Allegheny County Republican Party at his home early Thursday morning as part of a nationwide investigation into former President Donald Trump’s attempt to send alternate electors from key swing states to Washington to overturn the 2020 election.

Agents spent about an hour at party chairman Sam DeMarco’s Oakdale home and served him with a subpoena for communications between him, members of the Trump campaign and legal team, and Trump electors in Pennsylvania, DeMarco told The Pittsburgh Post-Gazette on Thursday.

“I’ll certainly comply with their request,” DeMarco said. He has until July 8 to turn over emails, texts and any written correspondence, he said.

DeMarco said he didn’t have direct contact with Trump’s campaign or the legal team led by Rudy Giuliani, just with the other 19 Trump electors.

Pennsylvania was one of seven key states in which the Trump campaign pressured its electors to sign declarations falsely asserting they were the duly chosen members of the electoral college, rather than the electors representing President-elect Joe Biden.

But in Pennsylvania and New Mexico, the electors balked, insisting the declaration’s language be changed to say they should only be recognized as duly elected if Trump won his court challenges to Biden’s victory.

That distinction might have spared those Pennsylvania and New Mexico electors from the legal jeopardy potentially facing their counterparts in Arizona, Georgia, Michigan, Nevada and Wisconsin, where electors flat-out declared themselves “duly elected.”

In Pennsylvania, the electors told a Trump campaign lawyer to add language saying they’d only be considered legitimate electors “if, as a result of a final non-appealable court order or other proceeding prescribed by law, we are ultimately recognized as being duly elected,” according to records obtained in January by the Washington-based nonprofit American Oversight.

“It was presented to us as, ‘We’re preserving the president’s rights should he win these court cases,’” DeMarco said. “A number of us pushed back — and there wasn’t any push on their side — but we said we need to make the elector certificate say that. This isn’t some verbal promise on a conference call.”

State Attorney General Josh Shapiro, the Democratic nominee for governor, said in January that, because they hedged their language, “our office does not believe this meets the legal standards of forgery.”