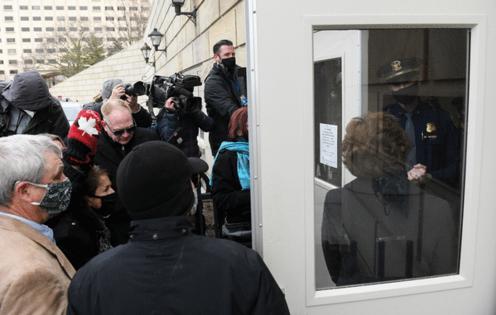 LANSING, Mich. — Some of the 16 Michigan Republicans who signed a certificate falsely claiming to cast the state's electoral votes for former President Donald Trump in December 2020 are receiving grand jury subpoenas from federal officials, according to multiple sources.

The development, which was still unfolding in the battleground state on Thursday morning, marked the latest escalation of a national investigation into whether laws were broken by Trump allies as they pushed to challenge and overturn the results of the last presidential election.

It's unclear whether the Michigan Republicans are being sought as witnesses or targets of the investigation.

Republican Michele Lundgren of Wayne County, one of the 16 Trump electors in Michigan, said a group of officials, including someone with the Federal Bureau of Investigation, served her with a subpoena on Thursday. Lundgren said a fellow elector received a subpoena on Wednesday.

Lundgren, who's 72, said she let one of the individuals go through her phone and computer.

Lundgren described the conversation as "long" and "pleasant."

Asked if any of the 16 Trump electors in Michigan had made the state GOP aware that they were contacted by the FBI, Gus Portela, the party's spokesman, said the party was aware "that folks are likely to be contacted."

Trump and some of his supporters have maintained that he won Michigan despite the fact that Democrat Joe Biden beat him by 154,000 votes or 3 percentage points. Biden's victory has been upheld by a series of court rulings, more than 200 audits and an investigation by the Republican-controlled state Senate Oversight Committee.

As part of the campaign to reverse Trump's loss, his backers gathered in the basement of Michigan Republican Party headquarters on Dec. 14, 2020, the same day Michigan's true presidential electors were meeting in the state Capitol. The Republicans signed a document falsely claiming that they were casting Michigan's electoral votes for Trump and that they had convened in the state Capitol.