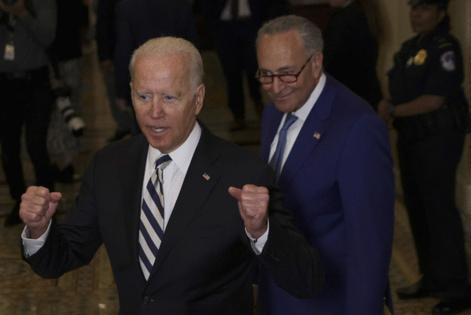 At one point in Al Gore’s seminal 2006 film “An Inconvenient Truth,” the former vice president laments that his tobacco-farming parents didn’t stop raising tobacco until after their beloved daughter Nancy died of lung cancer in Tennessee.

“It’s just human nature to take time to connect the dots,” Gore says in the film. “But … there can be a day of reckoning when you wish you had connected the dots more quickly.”

All these years later, many anxious Americans hope President Joe Biden and Senate Majority Leader Chuck Schumer have fully connected the dots — politically and morally — on climate change. As Gore suggests in the film, global warming is our planet’s own late-stage disease. Terminal consequences are all but guaranteed unless we apply shock treatment now.

And yet Biden and Schumer still have not figured out a way to unlock $550 billion in climate “medicine” sitting on the negotiation table in the U.S. Senate. The spending, part of a possible budget reconciliation deal, would transform our nation with massive tax credits for wind and solar power, money to decarbonize transportation, and funding for a Civilian Climate Corps, among other investments.

God knows getting 50 votes for anything in the U.S. Senate is as hard as battling advanced cancer — painful, nauseating, requiring every ounce of strength. But as tortured as the budget reconciliation process has been over the past year — with Biden’s Build Back Better agenda scaled back, then blocked completely, and now under discussion in a new form — one thing has remained constant: everyone in the Senate Democratic Caucus has solidly supported the $550 billion in climate money. That includes West Virginia Sen. Joe Manchin and Arizona Sen. Kyrsten Sinema.

But is the White House all in? There’s some speculation in D.C. that top climate advisers Gina McCarthy and John Kerry have been asked to push less publicly for bold climate action. Aides closest to the president are said to be concerned that a pared down reconciliation bill — absent child tax credits and other liberal policy favorites — would be a political liability in November, even if it does include climate and prescription drug features. Voters might blame Biden for not getting a full package passed. That logic seems shaky. More likely, and understandably, the White House just doesn’t trust Manchin and Sinema to negotiate in good faith this summer, so why try again?

But that horrible, inconvenient truth just won’t go away: The patient is dying. The world as we know it is vanishing. Over 7.1 million acres of forests burned in the United States alone in 2021. Hundred-degree days were recorded in the Arctic Circle in 2020. And top scientists affiliated with the United Nations say, on policy fixes, “Delay is death.”

So here’s the bottom line for Biden, Schumer and the rest of the Democrats: You have no right to give up. Delay, for any reason, is simply unacceptable. Instead, now is the time to press the issue, to connect all the difficult dots and act courageously. Democrats may lose one or both congressional chambers in November. And it might be 10 years before another big vote on climate is possible.

Clearly, Biden and Schumer want Manchin to put on paper what he wants in a budget reconciliation bill, including precise climate spending. If that doesn’t happen by late June, Schumer should present his own deal and negotiate from there. If Manchin really wasn’t ready to vote on climate spending, he presumably would have given it a hard no months ago, like he did with the child tax credit.

Indeed, even if climate funding is the only thing Manchin can vote for — with questionable investments in carbon sequestration and other of his pet projects tossed in — then take the deal. Unlike other policy challenges facing Congress, climate change has a clock attached to it. You pass something now or forfeit virtually any chance of rescuing the planet in the future.

And if Manchin, when pushed, doesn’t want a deal, if it was all a mirage, then make him and the entire Senate vote on a bill anyway. It’s time for accountability, as with the voting rights bill and abortion.

But we could also win. The $550 billion in investments could happen. But only if the White House stays in the fight. Against staggering odds, sick patients often survive the worst disease diagnoses. Usually it’s because doctors and families never gave up. At the darkest moment, when it would be easiest, no one walks away.

That’s what the planet needs right now. Those are the dots Al Gore is talking about in “An Inconvenient Truth.” And today, right now, is the day of reckoning.

Mike Tidwell is executive director of the Chesapeake Climate Action Network and author of “Bayou Farewell: The Rich Life and Tragic Death of Louisiana’s Cajun Coast.”