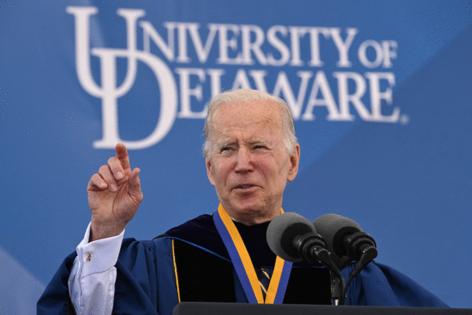 President Joe Biden decried U.S. gun violence after two mass shootings in less than two weeks, telling university graduates in his home state of Delaware “we must stand stronger” to make the country safer, including for children.

Biden addressed the University of Delaware commencement ceremony a day before he’s due to visit Uvalde, Texas, where a shooter who legally bought two assault rifles killed 19 children and two teachers at an elementary school on Tuesday. He also cited a May 14 mass shooting at a Buffalo, New York, supermarket, linking it to “white supremacy.”

“In the face of such destructive forces, we have to stand stronger,” Biden said Saturday. “We cannot outlaw tragedy, I know, but we can make America safer. We can finally do what we have to to protect the lives of the people and of our children.”

While short of an explicit call for new gun control measures, Biden’s comments were in line with his demand after the Texas shooting for Americans to “stand up to the gun lobby.” The mass shootings are the latest crisis to consume the White House, which has spent the last year-and-a-half dealing with a pandemic, inflation and Russia’s invasion of Ukraine.

Vice President Kamala Harris, speaking at a memorial service for one of the Buffalo victims later Saturday, said the U.S. is experiencing an “epidemic of hate.” She called for a ban on assault weapons, telling reporters they’re “a weapon of war with no place in a civil society.”

A 10-year federal law banning assault weapons for civilian use expired in 2004 and hasn’t been renewed, reflecting the political difficulty of passing gun control legislation.

Biden sought to convey a hopeful message at his alma mater, telling 2022 graduates it’s possible to overcome the political battles of “mindless competing factions” and move the country forward “when we begin to see each other again not as enemies, but as neighbors.”

His speech coincided with the second day of the National Rifle Association’s annual convention in Houston, where a series of speakers on Friday, including former President Donald Trump, rejected tighter gun control and defended the right to bear arms.

The University of Delaware is home to the Joseph R. Biden Jr. School of Public Policy and Administration and the Biden Institute, a think tank focused on public policy. The president graduated in 1965 with a double major in history and political science.